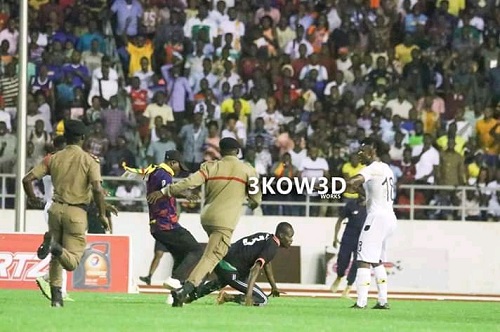 Ghana has been fined a sum of $10,000 by CAF for the pitch invasion by Awal Suleman during Ghanaâ€™s 2-0 win over South Africa at the Cape Coast Sports Stadium during the 2021 AFCON qualifiers last year.

A statement from GFA on Wednesday said:Â  The Confederation of African Football (CAF) has fined Ghana an amount of Ten Thousand US Dollars (US$10,000) for the invasion of the field of play by a soccer fan.

This is in relation to the incident that occurred at the latter stages of the Black Stars' win over South Africa in the 2021 Africa Cup of Nations qualifiers at the Cape Coast Stadium on November 14, 2019.

CAF Disciplinary Board fined Ghana the amount of US$10,000 for the incident after studying the reports from the match officials.

Commenting on the issue in a radio interview, Prosper Harrison Addo said the country's governing football body has 60 days ultimatum to pay the fine.

"You remember that CAF fined us 10,000 dollars for the pitch invasion at the Cape Coast Stadium. We have been given 60 days to pay the fine. We could have used the 10,000 dollars for other important things but we are wasting it on one person."

He also indicated that the association will put mechanisms in place so thatÂ theÂ November 14 incident does not happen in future.

"There is a need for lovers of our national teams to behave appropriately within the laws of game. This is really important because our actions have consequences for the GFA and the State at large. We will continue to educate the patrons of the game but there will be mechanisms to ensure that fans who cause the Nation to lose money in this manner are brought to book."