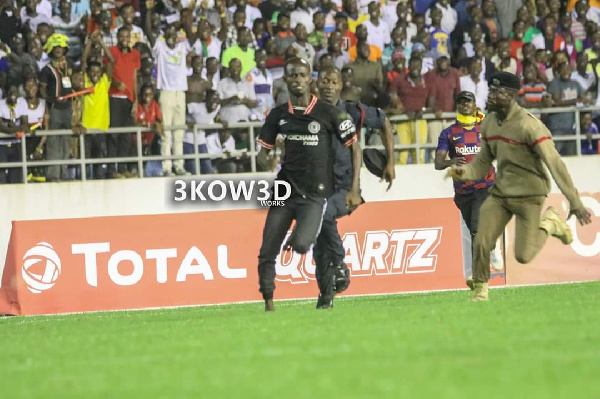 The Ghana Football Association has confirmed that they will not appeal CAF's fine for Awal Suleman's pitch-invasion during AFCON qualifier last year.

A statement from GFA on Wednesday said:Â  The Confederation of African Football (CAF) has fined Ghana an amount of Ten Thousand US Dollars (US$10,000) for the invasion of the field of play by a soccer fan.

This is in relation to the incident that occurred at the latter stages of the Black Stars' win over South Africa in the 2021 Africa Cup of Nations qualifiers at the Cape Coast Stadium on November 14, 2019.

CAF Disciplinary Board fined Ghana the amount of US$10,000 for the incident after studying the reports from the match officials.

Reacting to the news, the Communications Director of GFA, Henry Asante Twum indicated that the country's football governing body will not appeal the decision.Â

But sometimes there have been situations where the venue is banned from hosting all CAF competitions but in our case, Cape Coast is still intact, we were even preparing to host Sudan in Cape Coast until the Covid-19 forced CAF to postpone all the games. Venue has not been touched, there hasn't been any punitive measure on Ghana with as regards what we intend to do going forward, he told Class FM.

All CAF said was that we have been fined 10000 dollars for the incidence, so I think it is something that is manageable from the side of the FA I don't think we will appeal.

We will allow the verdict to run and now what we intend doing is to engage government and see how we will make the payment. "

Henry Asante further cautioned Ghanaians never to invade pitches as it has huge consequences on the nation.