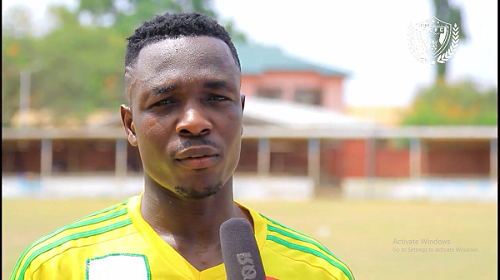 Legon Cities strikerÂ Benjamin Dadida Okine has fired shots ahead of their fixture against Eleven Wonders in matchday 12 of the 2019/20 Ghana Premier League.

The Royals welcome Eleven Wonders to the Accra Sports Stadium on Saturday, February 29, at 3: 00 pm. They are hoping to pick their first 3 points after recording successive draws in their last 3 games.

Speaking ahead of the game, Okine proclaimed that they are bent on picking their third win of the season.

"Yeah, I am much worried about it, it is a dream of every player to play and win every single game. As we are going in our next game I think we are going to get our third win of the season. We've won only two games and this time around on Saturday we will pick our third 3 points.

So for we not winning the previous games, we are still working hard to get more wins and we are not at rest at all.

Benjamin Dadida Okine who broke his duck in his club's 1-1 draw against King Faisal on matchday 11 said, added that he is fired up for Saturday's game and will be seeking to fire his outfit to victory should he be given the nod.Â Â

I am much confident, you know every striker gets more confident after scoring a goal and I think me scoring my first has really boosted my confidence in the League and I know every moment I am given in the game or our next game I am going to score a goal.

Legon Cities are 14th on the standings 2 points below 12th placed Eleven Wonders.