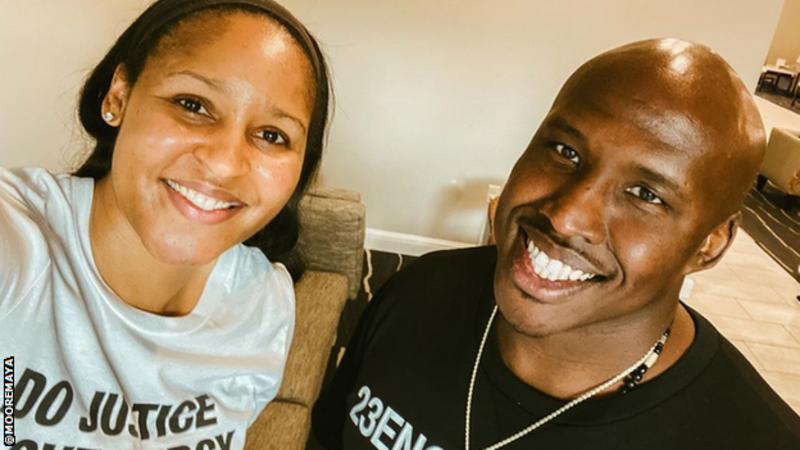 Irons and Moore, pictured after his release from prison in July this year
Shares

Irons was released in July after 23 years in prison, his conviction having been overturned in March.

Moore had paused her WNBA career in 2019 to focus on getting him free.

"We got married a couple of months ago and we're excited to continue this new chapter of life together," Moore, 31, told Good Morning America.

Moore was a first-round draft pick for the Minnesota Lynx in 2011, helping them win four championships and being named MVP in the 2014 season.

The 31-year-old, one of the best players in WNBA history, also has two Olympic and two World Championship gold medals.

But she gave up her career early in 2019 to help Irons, whom she had met 12 years before and who was serving a 50-year term.

Moore fell to her knees when she greeted Irons, 40, as he walked out of Jefferson City Correctional Center - a maximum security prison in rural Missouri - as a free man.

Asked whether she would go back to her playing career, Moore said: "I'm hoping sometime in the spring we'll be able to have a next step moving forward.

"Right now I am trying to really just breathe from this long, long battle and enjoy and rest.

"There's a lot of unknowns for a lot of us right now so I'm still in that camp."