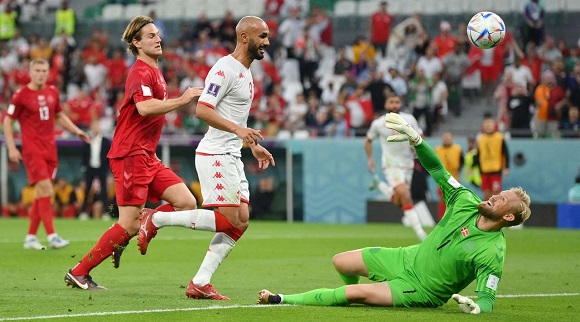 Denmark were forced to settle for a point on their FIFA World Cup 2022 opener in Group D, as Kasper Hjulmand’s side were held to a 0-0 draw by Tunisia at Education City Stadium in Al Rayyan.

The Eagles of Carthage, who sit 20 places behind Denmark in the world rankings, were the side to assert themselves on the game in the first-half, as they had chances to take the lead.

The best of them came shortly before half-time, but Isaam Jebali’s chipped effort from close-range was spectacularly saved by Kasper Schemeichel’s outstretched right hand.

Denmark upped their tempo in the second period and in the 70th minute had a superb chance to take the lead, but Andreas Cornelius’s header from a couple of yards out cannoned back off the bottom of the post when it looked easier to score.

Neither team were unable to find the breakthrough late on despite making attacking substitutions, as they both had to settle for a goalless draw.