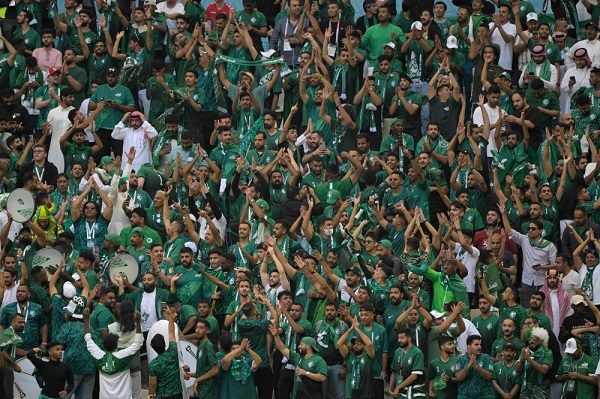 All public and private sector employees and students in Saudi Arabia will have the day off on Wednesday after their national team beat Argentina 2-1 in one of the biggest shocks in World Cup history.

The Gulf state is currently ranked a lowly 51st in the world behind hosts Qatar and came into the tournament with low expectations in a group with Argentina, who were tipped by many to challenge for ultimate glory.

But in a truly stunning turn of events, the underdogs sent the team ranked number three in the world crashing to the bottom of Group C with a stellar 2-1 victory.

Saudi fans were pictured performing a Cristiano Ronaldo-style 'SIU' celebration en-masse as they filed out of the stadium in giddy scenes of pure joy.

And now, Saudi Arabians can continue their celebrations Wednesday as King Salman approved plans to give all employees and students a national holiday.

During the match, Saudi Arabia, the second-lowest ranked team in the tournament after Ghana, were down 1-0 by the 10th minute after Messi scored a penalty.

But Saudi Arabia threw caution to the wind at the start of the second half, charging at Argentina's defence in front of a frenzied 88,012 crowd.

Saleh Al-Shehri squeezed in a low shot in the 48th minute while Al-Dawsari curled in a scorching strike from the edge of the penalty area in the 53rd minute to leave Argentina and Messi looking utterly shell-shocked in the Group C opener.