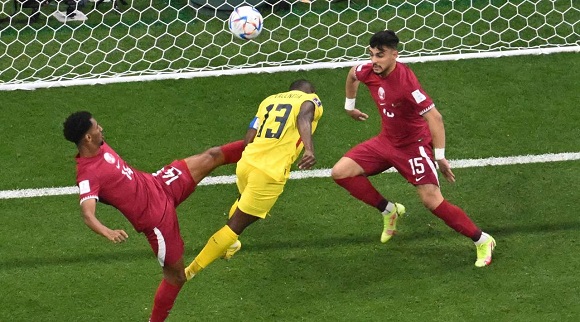 The FIFA World Cup got off to a record-breaking start as Qatar became the first hosts to lose their opening game of the tournament, falling 2-0 to Ecuador at the Al Bayt Stadium.

A brace from Enner Valencia was enough to start the South Americans' campaign perfectly, as they ran out comfortable winners in a dominant display.

Despite the partisan atmosphere, the Ecuadorians were calmness personified in possession, dictating the tempo under next-to-no pressure from the Qataris.

Brighton and Hove Albion duo Moises Caicedo and Pervis Estupinan offered thrust and guile in the engine room and down the left respectively as Gustavo Alfaro's side threatened to rack up a cricket score, but they kept the scoring down as they eased down to preserve themselves for tougher fixtures ahead.

For Felix Sanchez's Qatar, it is - and they got off to - the worst possible start. Valencia thought he had opened the tournament's scoring inside three minutes, nodding in from close range after a penalty box melee from an Estupinan free-kick, but VAR mysteriously disallowed the strike on the grounds of a very dubious offside.

On 16 minutes, however, the Ecuadorians got justice, as nervy home goalkeeper Saad Al-Sheeb felled the onrushing Valencia, conceding a penalty.

The former West Ham and Everton striker converted confidently, and he doubled his side's lead just after the half-hour, as he glanced a header into the far corner from an Angelo Preciado cross to put the game beyond the hosts.

Almoez Ali came closest for the home side as he fluffed Hassan Al Haydos' cross from close range on the stroke of half time.
Romario Ibarra forced Al-Sheeb into a fair save with a curler just shy of the hour in a rare match highlight.

The ideal start for Ecuador, but they mustn't get complacent. Valencia hobbled off with a knee problem that could change their fortunes, and they'll be keen to wrap him in cotton wool ahead of their next game against the Netherlands. For Qatar, it's back to the drawing board - and fast.