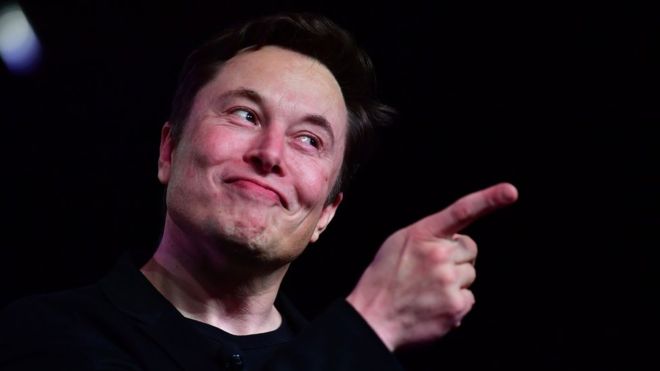 Tesla has reopened its only US electric car plant in California, despite local orders against manufacturing.

On Monday, the company's chief executive Elon Musk tweeted that production had restarted and he would be "on the line with everyone else".

US states and local governments are trying to determine the best way to open up after lockdown.

Mr Musk previously vowed to move the firm's headquarters out of California if the plant was not allowed to reopen.

While the state has eased restrictions to allow manufacturing, Alameda County, where the Fremont plant is located, has not. The town is about one hour south of San Francisco.

On Saturday, Elon Musk said that Tesla had filed a lawsuit against the county asking a court to remove the order that prevents the carmaker from resuming production.

Rather than wait for a ruling, Mr Musk announced on Twitter on Monday that the plant would reopen.

The local police department said that it was aware of the situation, but that it would act at the discretion of county health officials.

The Alameda County Public Health Department said on Monday it was "actively communicating" with Tesla about reopening plans and that it was taking the same approach it had taken with other business that had violated lockdown orders.

In an email seen by Reuters, Tesla also reportedly told workers the decision to reopen was in line with California guidelines.

Mr Musk wrote on Twitter that Tesla had been "singled out", saying that other US carmakers were allowed to restart production.

Pictures of the Tesla car park on Monday showed it mostly full. The plant has been closed to all but limited essential operations since 26 March.

Production outside of California
Tesla opened a plant in Shanghai last year and it is building another outside of Berlin, but Fremont is home to Tesla's headquarters and its primary manufacturing facility.

On Saturday, Mr Musk said he would relocate the US plant to another state if necessary to restart production.

Officials from Texas, Utah, Georgia and Nevada, where Tesla already has a battery assembly plant, had reached out to Twitter offering incentives to move their jurisdictions.

US Treasury Secretary Steven Mnuchin said on Monday California "should prioritize" helping Tesla reopen because it was one of the biggest manufacturing employers in the state.

The state's governor, Gavin Newsom, said that he had spoken with Mr Musk last week and that his concerns were part of the reason California decided to phase in manufacturing as it slowly lifts lockdown measures.