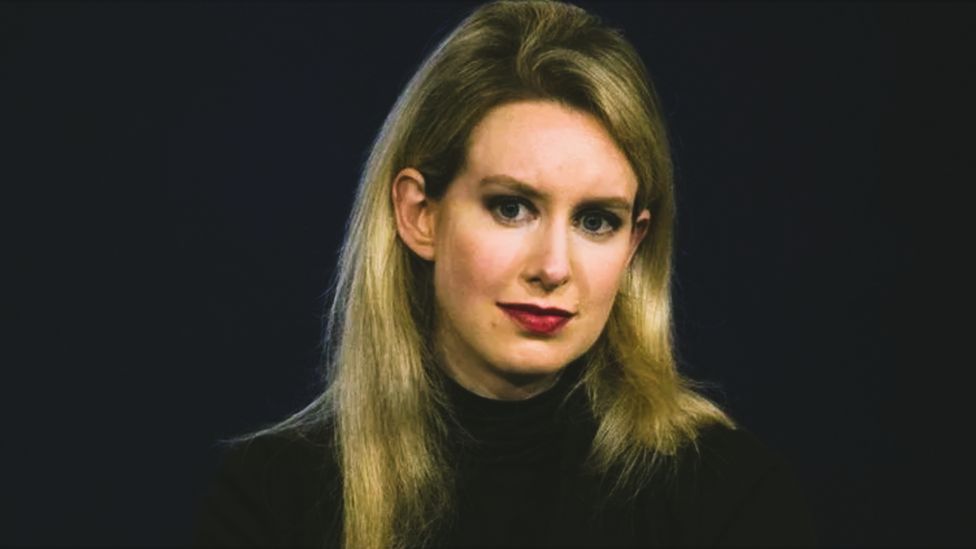 For years Elizabeth Holmes was the darling of Silicon Valley, a woman that could do no wrong.

The start-up she founded, Theranos, attracted hundreds of millions of dollars in investments.

Yet the company she had built was based on fantasy science.

The technology Theranos was producing - supposedly testing for hundreds of diseases with a pin prick of blood - seemed incredible. And it was.

Millions of dollars were squandered and some who used the company's tests, including a cancer patient, say they were misdiagnosed.

Now, years after Theranos collapsed, Ms Holmes is on trial in California for fraud (she has pleaded not guilty).

For an outsider to Silicon Valley the story sounds nonsensical. How were so many people taken in?

Yet in Silicon Valley, many believe that Theranos - far from being an aberration - speaks of systemic problems with start-up culture.

Faking it until you make it
In Silicon Valley, hyping up your product - over-promising - isn't unusual, and Ms Holmes was clearly very good at it.

A Stanford University drop-out, she was, by all accounts articulate, confident and good at presenting a vision - a mission as she described it - to revolutionise diagnostics.

Sceptical experts told her that her idea was just that - an idea - and wouldn't work.

But she projected an unfaltering confidence that the technology would change the world.

"It's baked in to the culture" said Margaret O'Mara, author of The Code: Silicon Valley and the Remaking of America.

"If you are a young start-up in development - with a barely existent product - a certain amount of swagger and hustle is expected and encouraged" she said.

Particularly at an early stage, when a start-up is in its infancy, investors are often looking at people and ideas rather than substantive technology anyway. General wisdom holds that the technology will come with the right concept - and the right people to make it work.

Ms Holmes was brilliant at selling that dream, exercising a very Silicon Valley practice: 'fake it until you make it'.

Her problem was she couldn't make it work. Her lawyers have argued that Ms Holmes was merely a businesswoman who failed, but was not a fraudster.

The problem in Silicon Valley is that the line between fraud and merely playing into the faking it culture is very thin.

"Theranos was an early warning of a cultural shift in Silicon Valley that has allowed promoters and scoundrels to prosper," said tech venture capitalist Roger McNamee, who is critical of big tech and did not invest in Theranos.

He believes that a culture of secrets and lies in Silicon Valley, a culture that allowed Theranos' tech to go un-analysed, is "absolutely endemic".

Ambition can be good. Promising a brighter future, and then trying to realise that vision, brought about computers and smartphones.

But for investors, trying to separate the charlatans from the revolutionaries is a constantly evolving challenge.

Last month, Silicon Valley phone app start-up HeadSpin's CEO and founder, Manish Lachwani, was arrested for allegedly defrauding investors. For people putting money on the line, there are great fortunes to be made and lost.

Keeping the 'secret sauce' secret
In Silicon Valley intellectual property is closely guarded. The 'coke' recipe, the secret sauce, is often the thing that gives a company value, and new technology firms are particularly sensitive to having their ideas copied or stolen.

Secrecy is important for these companies to succeed - but that culture of secrecy can also be used as a smoke screen, particularly when even employees and investors don't understand or aren't given access to the technology itself.

This is what happened at Theranos. Journalists, investors, politicians, you name it, were all told the science was there. Yet when questions were asked they were told the technology was so secret that it could not be fully explained, analysed or tested.

Walgreens, a major client of Theranos, became exasperated with the lack of information given by the company about how the system worked.

There are many Silicon Valley companies I've reported on that will not fully explain how their tech actually works. They claim to have "proprietary" systems that cannot yet be revealed or peer-reviewed.

The system is based on trust, yet it is fundamentally at odds with a culture of "faking it" and creates the perfect environment for Thernanos-type scandals, where claims that aren't true are left unchallenged.

Borrowing from the CIA playbook
A system that places so much emphasis on secrecy needs lawyers, and lots of them. Companies don't want their employees running off with ideas. Non-disclosure agreements (NDAs) are endemic in the start-up world - and by no means confined to tech.

But Silicon Valley's culture of secrecy makes it notably difficult for whistle-blowers.

This is not uncommon in Silicon Valley, says Cori Crider from Foxglove, a group that helps whistle-blowers come forward.

"I spent more than a decade working in national security and I very often feel like Silicon Valley types play from the playbook of the CIA on this stuff", she said.

"They have managed to scare people and make them think they don't have the right to raise legitimate issues."

If founders and chief executives aren't being honest, employees need to feel comfortable raising the alarm. All too often they don't.

A wild west of money and ambition
Amid the hype, it can be easy to forget that many investors looked at Theranos and passed - especially those with a knowledge of healthcare.

Among those who were notable investors were people and groups without expertise in health, such as the media mogul Rupert Murdoch.

For these investors with capital, often their decision to put in a stake assumes that smaller early stage funders have done their homework on the tech.

"They're kind of taking third party validation at its word," said Ms O'Mara.

Once again, it's a system based on trust - later investors trusting that earlier ones know what they're doing. The problem here is, with so much money sloshing around, that is not a given.

In the end, Theranos got caught. As a health technology company doing real life diagnostics, results and regulators would eventually prove it real or fake.

But with many Silicon Valley companies selling the supposedly new and the cutting edge in fields far less tightly regulated, scrutiny is more lax.

Today, the 'fake it until you make it' culture is still alive and well - as is the repressive culture of secrecy and the aggressive use of NDAs for employees. It's a model that has its advantages - and helps churn out extremely valuable and sometimes innovative companies.

But it also means the ingredients are still in place for another Theranos scandal.