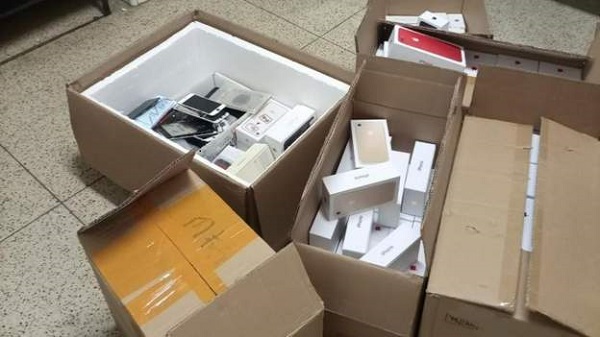 The Mozambican authorities have seized 1,165 fake Apple iPhones and arrested two Chinese nationals following a raid at an apartment in the capital, Maputo, where the counterfeits were being assembled.

Police said the suspected counterfeiters were able to use complex technical procedures, including assigning unique serial numbers to the phones.

The suspects have denied any wrongdoing.

Customs officials said they found the suspects thanks to a tip-off.

“We received a complaint that caused suspicion. So we activated our operational lines to determine the veracity and after three weeks of investigation we discovered this factory,” said Gino Jone, the director of Mozambique customs operational area in Maputo City.

He added that some of the seized phones are suspected to have been smuggled into the country, while others were obtained through theft.

“It’s an apartment but it works like a factory. Mobile phones are made here, IMEIs [unique serial numbers] are placed and sold in a store located in the Alto-Maè area,” he said.