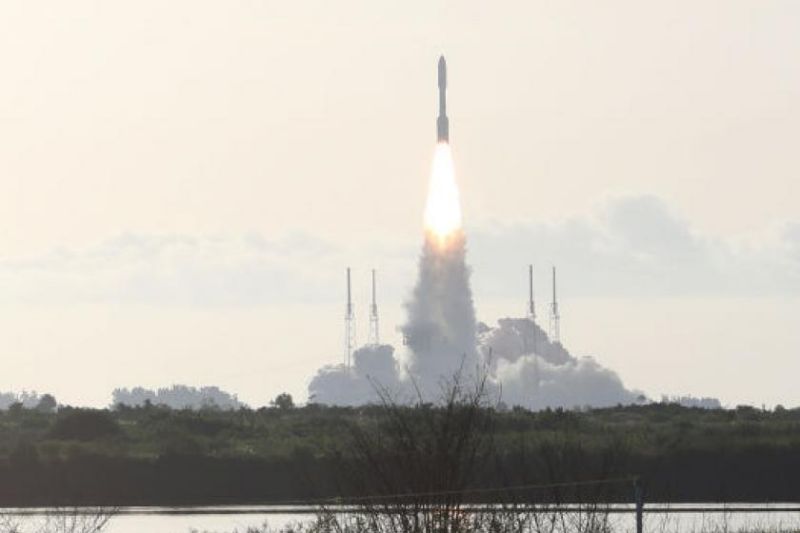 After touching down inside the 28-mile-wide (45 kilometers) Jezero Crater in February 2021, Perseverance will do things no Mars rover has ever done â€” hunt for signs of life, collect samples for future return to Earth and deploy a miniature helicopter, to name a few.

The launch was made more exciting by an earthquake that rattled Perseverance's mission control center at NASA's Jet Propulsion Laboratory in Pasadena, California. It did not affect the countdown aside from some surprised reactions from JPL commentators.

NASA celebrated the Mars launch in style, while also shifting its outreach for the mission online due to the COVID-19 pandemic. Grammy-winner Gregory Porter sang "America, the Beautiful" from his home ahead of the mission. Virginia 7th-grader Alex Mather (who named Perseverance) and Alabama 11th grader Vaneeza Rupani (who named the rover's helicopter Ingenuity) watched the launch in person.

Hunting for Mars life
NASA's twin Viking landers searched for signs of contemporary life on Mars from the mid-1970s through the early 1980s, returning intriguing but ambiguous results that scientists still argue about today.

That ambiguity sent the space agency back to the drawing board, convinced that it needed to learn much more about the Red Planet before mounting another astrobiology mission. NASA devised a "follow the water" strategy, probing Mars' past and present habitability with a series of robotic explorers such as the Spirit, Opportunity and Curiosity rovers.

Those missions gathered plenty of evidence that the Martian surface, which is now cold, dry and desolate, may have been habitable in the ancient past. For example, Curiosity found that billions of years ago, its landing site, Gale Crater, hosted a long-lived lake-and-stream system that could have supported life as we know it. (Curiosity continues to explore Gale today, nearly eight years after touching down there.)

"Now that we know what the history of Mars was, we can say, 'OK, maybe there was life there. Let's go find out if there was life on Mars,'" Bridenstine said.

Perseverance, the centerpiece of NASA's $2.7 billion Mars 2020 mission, will aim to do just that on the floor of Jezero, which harbored a lake and a river delta in the ancient past. During a surface mission lasting at least one Mars year (a little less than two Earth years), the 2,260-lb. (1,025 kilograms) rover will characterize the crater's geology in detail, mapping the composition of rocks that preserve a record of Jezero's long-gone warm and wet days.

Such work could identify carbon-containing organic molecules â€” including, perhaps, some that were produced by Martian microbes long ago. The rover may even find structures in Jezero rock that were created by native organisms, features akin to microbial mats here on Earth known as stromatolite

But Perseverance's onsite observations alone may not be sufficient to confirm the existence of Red Planet life, given the complexity of the task and the high evidentiary bar that scientists will impose for such a historic discovery.

"I do believe that the ultimate proof, and the ultimate analyses that are really critical to that question and the level of standard that we need to answer this, will come from laboratory analysis on Earth," Thomas Zurbuchen, associate administrator for NASA's Science Mission Directorate, said during a news conference on Tuesday (July 28).

Perseverance will help make such in-depth analysis possible. One of the rover's key tasks is to collect and cache at least 20 rock and soil samples, which will be selected on the basis of their astrobiological promise and potential to paint a picture of Jezero through time.

This material will be recovered and brought to Earth as early as 2031 by a joint NASA-European Space Agency campaign, giving scientists their first-ever looks at pristine pieces of another planet.

(Mars meteorites, a number of which researchers have examined up close to date, are decidedly not pristine, having journeyed through two planetary atmospheres and millions of miles of deep space. And these rocks tend to be young and volcanic, as well as randomly selected by the whims of cosmic impactors.)

"Once brought back to Earth, such a suite of samples would keep generations of researchers busy unraveling the secrets of Mars for decades, in the same way the Apollo samples have done, and still do, for the moon," Chris Herd of the University of Alberta in Canada, a Mars 2020 returned-sample scientist, said during the July 28 news conference.

Though Mars 2020 is primarily a science mission, it will also test out a variety of technologies that may pave the way for ambitious exploration efforts in the future.

For example, one of Perseverance's seven instruments, the Mars Oxygen In-Situ Resource Utilization Experiment (MOXIE), will generate oxygen from the Red Planet's thin, carbon dioxide-dominated atmosphere. Such gear, if scaled up, could help astronauts explore the Martian surface, a goal that NASA wants to achieve in the 2030s.

The rover also carries a ground-penetrating radar instrument that will be able to detect subsurface water ice, another resource that human pioneers could exploit on the Red Planet.

And Perseverance has a traveling companion, a 4-lb. (1.8 kilograms) helicopter called Ingenuity that will make the journey to Mars on the rover's belly.

After Perseverance rolls upon a suitable Martian airfield, Ingenuity will deploy and attempt a few short flights â€” the first ever by a rotorcraft on a world beyond Earth.

"Ingenuity is going to be a tech demonstrator for this particular mission, but in the future it could transform how we do planetary science on these other worlds," Bridenstine said during the July 27 event. Helicopters could someday serve as scouts on Mars and other distant worlds, helping mission controllers direct rovers to areas of scientific interest, he added.

Mars 2020 will feature other firsts as well, some of which will bring the Red Planet closer to home for people around the globe. For example, the mission sports two microphones, one of which will capture the sounds of the rover's wheels crunching through the Martian dirt, its drill boring through Red Planet rock and generally going about its scientific business.

The other microphone will record Perseverance's daring landing on Feb. 18, 2021, which will end when a rocket-powered sky crane lowers the big rover onto Jezero's floor with cables. (Curiosity, whose chassis strongly resembles that of Perseverance, proved out this sci-fi touchdown strategy in August 2012). Some of Perseverance's 23 cameras will memorialize the touchdown as well, capturing high-resolution photos and videos.

Two other NASA Mars surface missions have carried microphones, but neither captured any Red Planet sounds. The Mars Polar Lander failed during its December 1999 landing attempt. The Phoenix Mars Lander aced its touchdown nearly a decade later, but the mission team didn't turn on the spacecraft's microphone-equipped descent camera out of fear that doing so would compromise or complicate the landing.

Today's launch was the third Red Planet liftoff in less than two weeks. The United Arab Emirates sent its first-ever interplanetary mission, a Mars orbiter called Hope, skyward on July 19, and China followed four days later with its first fully homegrown Mars effort, the Tianwen-1 orbiter-lander-rover mission. All three missions are scheduled to arrive at the Red Planet next February.

A fourth Mars spacecraft, the European-Russian ExoMars rover Rosalind Franklin, was supposed to join the launch club as well. But the mission encountered parachute problems and other issues that couldn't be fixed in time to meet this summer's window, so Rosalind Franklin was put into storage until 2022. (Earth and Mars align favorably for interplanetary launches for just a few weeks every 26 months.)

India's first interplanetary effort, the Mangalyaan orbiter, reached the Red Planet in 2014, and the safe arrivals of Hope and Tianwen-1 early next year will further dilute NASA's long-held Red Planet dominance (which Europe has chipped into a bit as well). But that's something to celebrate, Bridenstine said.

"We welcome more nations taking trips to Mars and studying it, delivering the science and sharing the science with the world," he said during the July 27 news conference. "That's what science is all about."