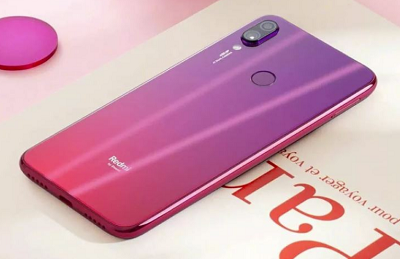 Late last year Xiaomi president Lin Bin teased an upcoming phone with a 48-megapixel camera, and today the company has revealed it in full.

Despite the eye-catching headline spec, it’s turned out to be a product under the entry-level Redmi brand called the Redmi Note 7.

Design-wise, it looks very similar to Xiaomi’s smaller, low-cost Mi Play announced a few weeks back, with a circular display notch, a back panel with colorful gradients, a rear-mounted fingerprint sensor, and rear-facing dual cameras — one of which uses that much-vaunted 48-megapixel image sensor and an f/1.8 lens, the other of which is 5 megapixels and used for depth information.

The camera can take photos with its 48 million tiny 0.8-micron pixels in good lighting, or combine neighboring pixels for what’s claimed to be the equivalent of a 12-megapixel photo taken with larger 1.6-micron pixels. At half an inch across, the sensor is physically quite a bit larger than what’s typically found in smartphones, which should give it strong light-gathering capability.

Of course, hardware is only half the story with phone cameras, so we’ll have to see how that works out in practice.

Last week CEO Lei Jun announced that Redmi will now be operated as an independent brand focusing on e-commerce and cost efficiency, leaving Xiaomi to concentrate on mid-to high-end phones and physical retail. Previous Redmi phones have been hugely popular in India in particular, but until now Xiaomi didn’t go out of the way to highlight the brand itself; now, the Note 7 carries a new logo on the back saying “Redmi by Xiaomi.”

The Redmi Note 7 will be available in China first, but should make its way to India and Xiaomi’s other usual regions subsequently.