Boy, 8, killed in grenade attack on apartment in Sweden 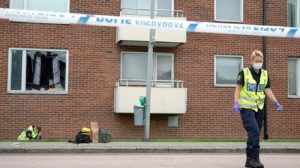 An eight-year-old boy has been killed after a grenade was thrown into a flat in the Swedish city of Gothenburg, police said.

Yuusuf Warsame from Birmingham in the UK was sleeping in the living room of the flat in the Biskopsgarten area, where he was visiting relatives with his mother, brother and sister.

Police said the â€œdespicableâ€ attack may have been linked to an underworld feud.

A man convicted over a fatal shooting in the area last year was registered as living at the address, police said.

â€œWeâ€™ll have to see if the motive is linked to that. Our theory is that it may be,â€ said police spokesperson Thomas Fuxborg,Â The LocalÂ reported.

At least five children and several adults were in the flat when the grenade was hurled inside.

Warsame died of his injuries on the way to hospital. Mr Fuxborg said he was not a member of the family registered at the address.

The boyâ€™s mother, sister and brother were in the same room when the attack happened but sustained only minor injuries, a relative told theÂ Birmingham Mail.

The fatal shooting in March 2015 was part of a vendetta within Gothenburgâ€™s Somali community, police said.

Men armed with automatic weapons burst into a Biskopsgarden pub, gunning down a man known to police and an innocent bystander in a spray of bullets.Eight people were convicted earlier this month and handed sentences ranging from seven years to life in prison.

Sweden generally has low crime rates but police have had difficulty addressing violence in poorer neighbourhoods in Stockholm, Gothenburg and Malmo.

Over the course of the summer, cars have been set alight on an almost nightly basis in some neighbourhoods.