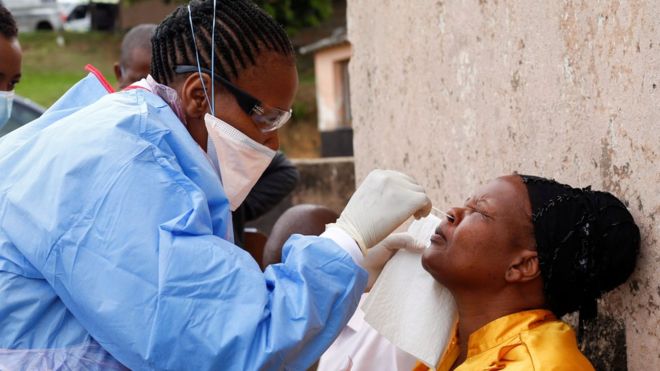 The head of the World Health Organization (WHO) has condemned as "racist" the comments by two French doctors who suggested a vaccine for the coronavirus could be tested in Africa.

The doctors' remarks during a TV debate sparked outrage, and they were accused of treating Africans like "human guinea pigs".

One of them later issued an apology.

When asked about the doctors' suggestion during the WHO's coronavirus briefing, Dr Tedros became visibly angry, calling it a hangover from the "colonial mentality".

"It was a disgrace, appalling, to hear during the 21st Century, to hear from scientists, that kind of remark. We condemn this in the strongest terms possible, and we assure you that this will not happen," he said.

As the number of confirmed cases in Africa continues to rise, some governments are imposing stricter measures to try to slow the spread of the virus. Kenyan President Uhuru Kenyatta has banned all travel in and out of the capital, Nairobi, and three other large towns for three weeks.

What did the doctors say?
During a debate on French TV channel LCI, Camille Locht, head of research at Inserm health research group, was talking about a vaccine trial in Europe and Australia.

Jean-Paul Mira, head of intensive care at Cochin hospital in Paris, then said: "If I can be provocative, shouldn't we be doing this study in Africa, where there are no masks, no treatments, no resuscitation?

"A bit like it is done elsewhere for some studies on Aids. In prostitutes, we try things because we know that they are highly exposed and that they do not protect themselves."

Mr Locht nodded in agreement at this suggestion, and said: "You are right. We are in the process of thinking about a study in parallel in Africa."

Dr Mira had earlier questioned whether the study would work as planned on healthcare workers in Australia and Europe because they had access to personal protective equipment (PPE) while working.

The doctors' comments have also fuelled existing fears in Africa that African people will be used as guinea pigs for a new coronavirus vaccine.

Coronavirus centres have been targeted in African countries - most recently, a facility that was under construction in Abidjan in Ivory Coast was attacked and destroyed by protesters.

Footage posted on social media showed people tearing the centre apart with their bare hands, and smashing construction materials on the ground.

What else is happening in Africa?
Meanwhile, prominent Nigerian actress Funke Akindele was fined $260 (Â£210) after holding a birthday party for her husband at her mansion in Lagos, attended by a number of other Nigerian celebrities.

Akindele and her husband pleaded guilty to violating Nigeriaâ€™s lockdown restrictions in a Lagos court, according to a statement from Lagos State police. The couple have also been ordered to do 14 days of community service.

In South Africa, a pair of newlyweds were arrested after breaking lockdown restrictions to go ahead with their wedding. Police turned up to the party in KwaZulu-Natal after receiving a tip-off, and arrested all 50 wedding guests, the pastor who conducted the ceremony, and the couple themselves.

Zimbabwe has warned people against buying and selling unregistered Covid-19 self-test kits. Unverified kits have been sold by private companies, including some pharmacies, but Health Minister Obadiah Moyo told the state-owned Herald newspaper that all kits need to be evaluated by the local authority first.