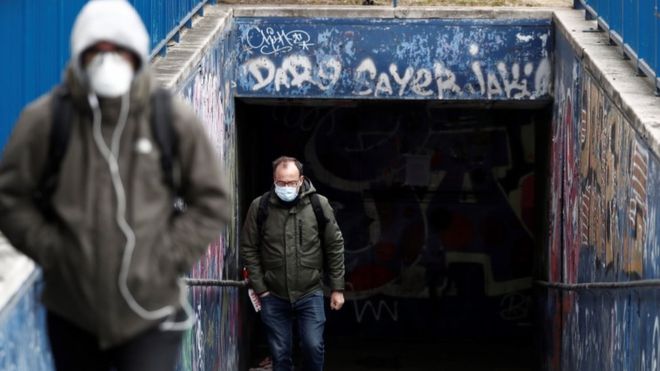 Passersby at the La Paz hospital in Madrid. Spain is in its fifth day of lockdown
Shares

European nations are already looking to extend lockdowns put in place to try to stem the coronavirus outbreak.

A lockdown imposed on 12 March in Italy, where the number of deaths may soon overtake China, will extend beyond the 25 March date set, its PM has said.

France said its 15-day lockdown may also be extended, with European leaders reluctant to give any deadline for an end to crisis measures.

The European Central Bank (ECB) has launched an emergency â‚¬750bn ($820bn; Â£700bn) package to ease the impact of the pandemic, with boss Christine Lagarde tweeting "there are no limits" to its commitment to the euro.

The EU has introduced strict border controls. Travellers from outside are being turned away from airports and borders after the 27-country bloc imposed a 30-day ban to halt the spread of coronavirus.

READ ALSO:Â US: Foreigners in Ethiopia being attacked over virus

But EU leaders also agreed that internal borders that have been erected in recent days should come down.

He said on Twitter: "I am doing well and in good spirits."

What of the Italian and French lockdowns?
Italy shut down most businesses and banned public gatherings nationwide on 12 March.

But Prime Minister Giuseppe Conte said on Thursday: "The measures we have taken... must be extended beyond their original deadline."

He said the measures had meant "we have avoided the collapse of the system".

But he told Corriere della Sera that "we will not be able to return immediately to life as it was before" even when the measures end.

Italy on Wednesday reported a rise in deaths of 475 in one day. Any similar figure on Thursday would see it pass China's official death toll of 3,130, according to an ongoing list supplied by Johns Hopkins.

A report by the Istituto Superiore di Sanita into the deaths in Italy of 2003 people confirmed to be positive for coronavirus found that three regions, all in the north, were by far the worst hit.

Some studies point to the large number of elderly in the affected regions, and that a large proportion of 18-34s live at home with them. Different demographics in other nations may help to reduce deaths.

France began its lockdown on Tuesday morning, requiring citizens to carry a paper stating why they were not at home.

French Interior Minister Christophe Castaner told Europe 1 radio on Thursday: "The 15-day period may be extended. If necessary, the government will re-conduct it."

"Some people think they're some kind of modern-day hero when they break the rules - but they're imbeciles, and a danger to themselves," he said.

What else is happening in Europe?
German Chancellor Angela Merkel addressed the nation on television on Wednesday, which she has previously only done for her annual New Year message.

"The situation is serious. Take it seriously. Not since German reunification, no, not since the Second World War has our country faced a challenge that depends so much on our collective solidarity," she said.

Germany has not imposed stringent measures, although it has closed schools and many businesses and public spaces. People can still go out and socialise but German media said her speech appeared to be a final warning to avoid mandatory lockdowns.

Mrs Merkel did not announce new measures but said that could change at any time.

Germany on Thursday reported an increase to 10,999 cases, Deaths remain low but have risen to 20, the Robert Koch Institute said.

The UK has also not imposed stringent lockdown measures as yet but has announced schools will close. PM Boris Johnson could not give any date for them to reopen.

London is the worst-affected area in the UK and has now begun to slim down transport services.

Russia on Wednesday reported its first coronavirus-related death - a 79-year-old woman died from pneumonia in Moscow.

Russia, which has reported only 147 cases, has temporarily barred entry to foreigners. It insists it has been transparent with its figures, after some analysts questioned the low number.

READ ALSO: WHO warns Africa to 'prepare for the worst'

Austria on Thursday locked down its hotspot Tyrol province until 5 April - only residents, designated workers and goods can enter
Slovenia will ban socialising in public spaces from Friday
Portugal on Wednesday declared a nationwide 15-day state of emergency but Prime Minister Antonio Costa said it could be extended and even last several months
King Felipe of Spain made a powerful televised address on Wednesday night, telling Spaniards "the virus will not defeat us but on the contrary it will make us stronger as a society". Spain has opened an investigation into a Madrid retirement home, which has seen 19 deaths
Norway's parliament on Thursday agreed a package of emergency measures covering employment and health care