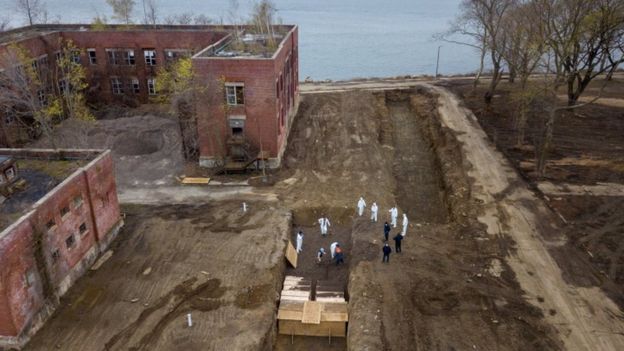 Images have emerged of coffins being buried in a mass grave in New York City, as the death toll from the coronavirus outbreak continues to rise.

Workers in hazmat outfits were seen using a ladder to descend into a huge pit where the coffins were stacked.

The location is Hart Island, used for New Yorkers with no next of kin or who could not afford a funeral.

New York state now has more coronavirus cases than any single country, according to latest figures.

The drone footage comes from Hart Island, off the Bronx in Long Island Sound, which has been used for more than 150 years by city officials as a mass burial site for those with no next-of-kin, or families who cannot afford funerals.

It is probable that many of the coffins are for coronavirus victims, but it is not clear whether they fall into the above categories.

Burial operations at the site have ramped up amid the pandemic from one day a week to five days a week, according to the Department of Corrections.

Prisoners from Rikers Island, the city's main jail complex, usually do the job, but the rising workload has recently been taken over by contractors.

New York City Mayor Bill de Blasio indicated earlier this week that "temporary burials" might be necessary until the crisis had passed.

"Obviously the place we have used historically is Hart Island," he said.

The number of coronavirus deaths in New York state increased to 799 on Wednesday, a record high for a third day.

But Governor Andrew Cuomo took heart from the fact that the number of Covid-19 patients admitted to New York hospitals dropped for a second day, to 200.

He said it was a sign social distancing was working. He called the outbreak a "silent explosion that ripples through society with the same randomness, the same evil that we saw on 9/11".

Another glimmer of hope was heralded on Thursday as official projections for the nationwide death toll were lowered.

Dr Anthony Fauci, a key member of the White House's coronavirus task force, told NBC News' Today show on Thursday the final number of Americans who will die from Covid-19 in the outbreak "looks more like 60,000".

The 60,000 projection would match the upper estimate for total flu deaths in the US between October 2019 to March 2020, according to government data.

But Vice-President Mike Pence stressed on Thursday that Covid-19 is about three times as contagious as influenza.

The White House has previously touted estimates that 2.2 million Americans could die from coronavirus if nothing was done to stop its spread.

Stay-at-home orders have in the meantime closed non-essential businesses in 42 states, while drastically slowing the US economy.

New data on Thursday showed unemployment claims topped 6 million for the second week in a row, bringing the number of Americans out of work over the last three weeks to 16.8 million.

Chicago meanwhile imposed a curfew on liquor sales from 21:00 local time on Thursday to stop the persistent violation of a ban on large gatherings.

He said it had cast a spotlight on inequity and the impact of "structural racism".