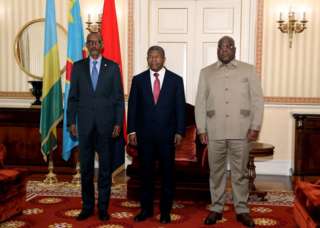 The presidents of the Democratic Republic of Congo and Rwanda have held talks at a time of increased tension over violence in eastern DR Congo.

DR Congo's President Félix Tshisekedi said after the meeting in Angola that he and his Rwandan counterpart Paul Kagame had agreed to restore trust and de-escalate tension.

Angolan President João Lourenço has been mediating the talks. He announced a "ceasefire" without giving any details.

“I am pleased to announce that we have had positive results, in our view, in that we have agreed on a ceasefire, among other measures," he said at the end of the talks.

There have been diplomatic tensions between the two neighbours - with DR Congo accusing Rwanda of backing a Tutsi militia known as the M23. Kigali denies this.

On Wednesday there were handshakes between the two leaders and some optimism – judging by the Congolese president’s comments.

Mr Tshisekedi said he and Mr Kagame had agreed to normalise diplomatic relations which have been extremely tense in recent weeks.

He also mentioned the immediate and unconditional withdrawal of the M23 rebel group from its positions in eastern DR Congo.

Quite how that will be achieved is unclear.