DR Congo: Is it one of the most dangerous places to fly? 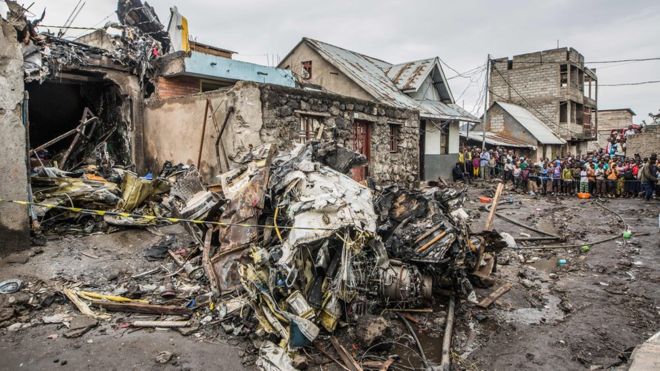 While flying is one of the safest ways to travel, in some countries with inadequate regulation and difficult terrain, it can be deadly.

Two recent crashes in the Democratic Republic of Congo have raised concerns about air safety there.

The most recent was earlier in November, when a plane crashed into houses in the eastern city of Goma, killing 27 people.

But how unsafe is it to fly in the DR Congo and how does it compare to other parts of world?

What is DR Congo's safety record?

Data from the Aviation Safety Network, which monitors and collates information about airline safety, shows DR Congo has had the most passenger-plane accidents in Africa since 1945.

Daniel Kwasi Adjekum, of the University of North Dakota, says the high accident rate in DR Congo can be attributed to a variety of factors, among them the large size of the country, its terrain and weak regulation.

Air travel is important because only four out of the other 25 provincial capitals in the country can be accessed by reliable roads from the capital, Kinshasa. 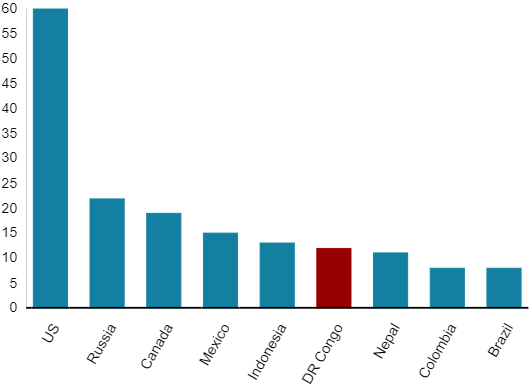 But DR Congo has dilapidated airport infrastructure, traffic navigation and surveillance equipment. There are also weak technical and safety regulations in the country.

Other challenges include the use of obsolete or aged aircraft.

There are also issues with flight crew and maintenance staff, who often lack supervision and stringent regulatory standards to adhere to.

And some accidents are down to factors such as bad weather, including heavy rains and storms during the rainy seasons, since DR Congo lies in the tropical belt. 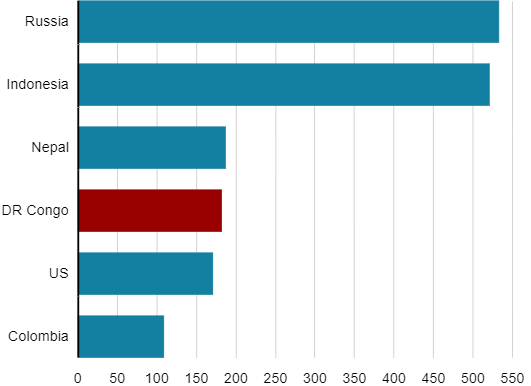 Who has the most accidents globally?
The US has had the most air accidents since 2010, followed by Russia, Canada, Mexico and Indonesia. But the US has some of the busiest commercial air routes in the world and the high volume of air traffic would make it more vulnerable to risk and possible safety lapses.

Russia has the highest number of people, 532, to have died in accidents since 2010 - followed by Indonesia, with 520 deaths.

These two countries have big commercial airline operations and passenger numbers have grown sharply in the past decade. In Russia, the number of people flying has nearly tripled since 2009. In Indonesia, it has grown more than fourfold.

Nepal has had a similar number of fatalities to DR Congo over that period - around 180, and it also has difficult terrain, issues with regulation and air safety, and growing numbers of people taking to the air.

But Nepal has three times as much passenger traffic as DR Congo, with a sharp rise in the last few years.

DR Congo's share of world air traffic is tiny - less than 0.1%. However, it has accounted for nearly 4% of total air accidents since 2010, meaning its safety record is particularly poor.

As a result, it is among those countries whose airlines are banned from or restricted within the European Union. But it is not the only African country on this list.

It includes 13 other African countries, as well some in Asia and Latin America.

In DR Congo, the worst year for accidents was 2007, when there were eight crashes in a single year.

But the country's deadliest accident was in 1996, when an Antonov transport plane overshot the runway in Kinshasa and slammed into a market, killing 237 people.