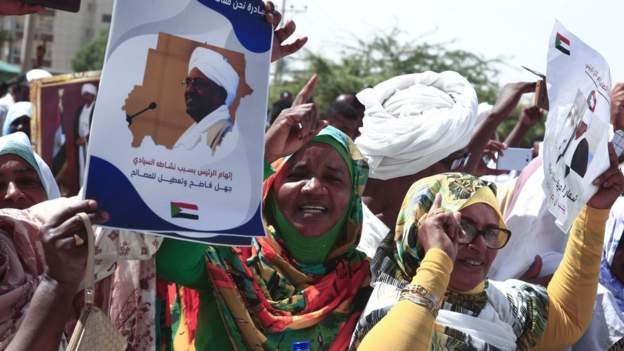 Mr Bashir stil has supporters in Khartoum, who protest outside the court where he is facing trial for corruption
Shares

A law has been passed in Sudan dissolving the party of ousted former president Omar al-Bashir.

Mr Bashir seized power in a 1989 coup and ruled for almost three decades, until he was overthrown by a protest movement in April.

Both measures responded to key demands of the protest movement, which aims to dismantle Mr Bashir's regime.

Sudan is currently led by a joint military and civilian council, as well as a civilian-led cabinet headed by Prime Minister Abdalla Hamdok.

Dissolving Mr Bashir's National Congress Party (NCP) means that the authorities can seize the party's assets. The decree confirmed that a committee would be formed to do this.

This, Mr Hamdok tweeted, is so they can "retrieve the stolen wealth of the people of Sudan".