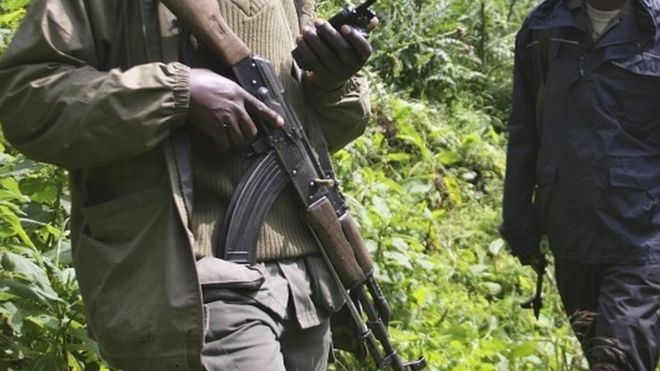 At least 12 rangers have been killed by suspected members of a Rwandan rebel group in the Virunga National Park in the Democratic Republic of Congo.

He said about 60 militiamen had ambushed a convoy of civilians that was being protected by the rangers.

Africa's oldest nature reserve is a popular tourist attraction, known for its population of mountain gorillas.

The biologically diverse park is a Unesco World Heritage site in the restive east of the DR Congo.

Another six people were injured in the attack blamed on militiamen from the Democratic Forces for the Liberation of Rwanda (FDLR), whose leaders have been accused of links to the 1994 genocide in which some 800,000 ethnic Tutsis and moderate Hutus were killed.

The group has so far made no public comments on the accusations against it.

A statement on the park's website said there were indications that this was an attack on the local civilian population.

"Virunga Park Rangers were not the target of the assault, but lost their lives responding to the attack in defence of the local population," the statement said.

Kidnappers have been known to target tourists in the park. In 2018 attackers killed park ranger Rachel Masika Baraka during the brief kidnapping of two British tourists and their driver.

The park closed to tourists on 23 March following advice from experts that gorillas might be vulnerable to complications from catching Covid-19.