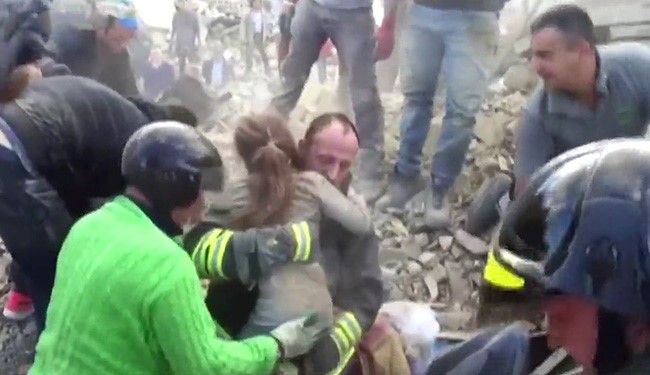 This is the dramatic moment a ten-year-old girl was pulled from the rubble after spending 17 hours trapped upside down in debris from the Italian earthquake.

The child was hauled to safety by rescuers who shouted 'she's alive' as they carried her from the ruins of a building in the devastated central Italian town of Pescara del Tronto.

Footage shows just the dust-covered legs of the youngster as emergency crews tried desperately to free her from the rubble.

One rescuer could be heard saying: 'You can hear something under here. Quiet, quiet.'

He then urged the child to wriggle free, saying: 'Come on, Giulia, come on, Giulia. ... Watch your head.' Cheers broke out when she was pulled out.

It was a brief moment of joy on a day in which at least 247 people were killed in the region following a 6.2-magnitude quake at 3.30am yesterday.

She had spent about 17 hours wedged in a collapsed building in what was once a picturesque hamlet. Incredibly, she did not appear to have suffered serious injuries.

Danilo Dionisi, a firefighter from Ascoli Piceno said after the child's rescue: 'The ten year old girl was just pulled out now from the rubble and she is being taken to the hospital and that is good news. As far as the rest is concerned, the images speak for themselves, you can see what the town looks like.'

The frantic search for survivors of the Italian earthquake was continuing tonight as witnesses likened the hellish scenes to 'Dante's inferno' - and shocking pictures showed how four towns were almost wiped off the map.

But as rescue efforts continue today, the chance of finding people alive more than 24 hours later will be dramatically reduced.