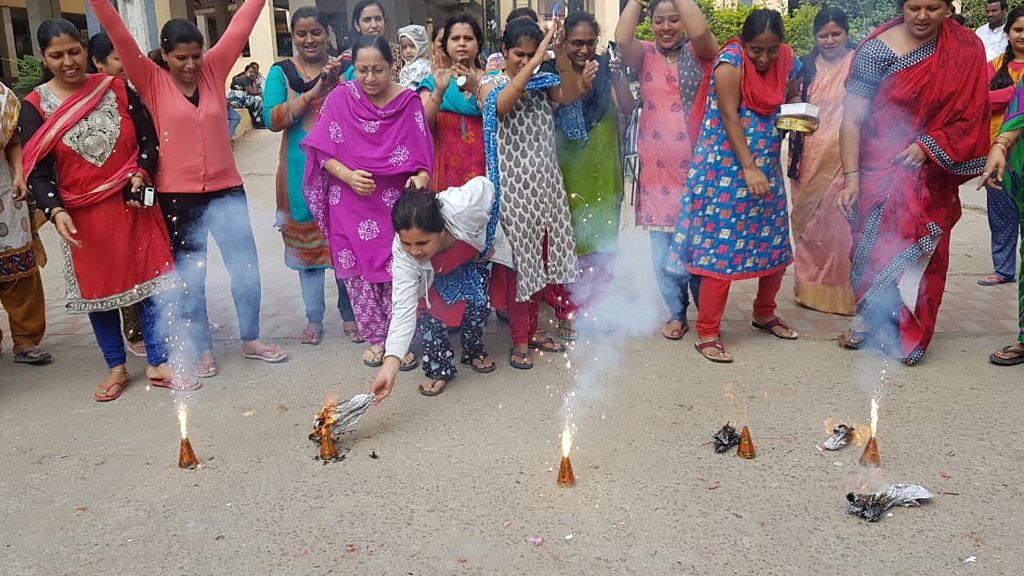 The men were in police detention and were taken back to the scene of the crime in the early hours of Friday.

The suspects were shot when they tried to steal the officers' guns and escape, police told BBC Telugu.

However, human rights organisations including Amnesty International have called for investigations to determine if these were extrajudicial killings.

After news of the killings broke, the victim's mother told the BBC, "justice has been done", while neighbours celebrated with firecrackers, and thousands of people took to the streets to hail the police.

How do the police explain the shooting?

Ten armed policemen took the four suspects - who were not handcuffed - to the scene of the crime to reconstruct the incident early on Friday, said VC Sajjanar, police commissioner of the Hyderabad suburb of Cyberabad.

The toll plaza where the rape and murder took place is close to the suburb, which houses a number of global tech companies like Microsoft and Google.

The police were looking for the victim's phone, power bank and watch which were reported missing, the police commissioner said.

"The four men got together and started to attack the officers with stones and sticks and also snatched away weapons from two officers and started firing," the commissioner said, in response to questions about why the men had been killed.

"Although the officers maintained restraint and asked them to surrender, they continued to fire and attack us. This went on for 15 minutes. We retaliated and four accused got killed."

Two officers suffered head injuries but these were not caused by bullets, he added. The two police officers were admitted to hospital, he said

"Let me tell you this. The law has taken its own course," he added.

The police were heavily criticised after the rape and murder of the vet - particularly when the victim's family accused them of inaction for two hours.

How have the victim's family reacted?

BBC Telugu's Deepthi Bathini visited the family in their home, where neighbours could be seen celebrating the news by setting off firecrackers and distributing sweets.

"I can't put it into words. I felt happiness but also grief because my daughter will never come home," the victim's mother said.

"My daughter's soul is at peace now. Justice has been done. I never thought we would get justice. No other girl should experience what my daughter did."

The mother added that she wanted the law on sexual assault and rape to be stricter.

"Men should be scared to even stare at women - because they will be punished," she said.

What about the wider reaction?

News of the police action has been widely celebrated on social media.

The mother of a student who died after being gang-raped on a bus in capital Delhi in 2012 also hailed the killing.

"I am extremely happy with this punishment. Police have done a great job," she told ANI news agency.

Could the police have acted differently?

A few have questioned the police's version of events.

Prakash Singh, a retired police officer and a key architect of police reforms, told the BBC the killings were "entirely avoidable".

"Abundant caution should be taken when people in custody are being taken to the court or the scene of the crime," he said.

"They should be secured, handcuffed and properly searched before they are taken out. All kinds of things can happen if the police are not careful."

But Mr Singh said it was too early to say if the incident was an extrajudicial killing - known popularly in India as an "encounter killing".

In the days after the rape and murder, thousands of people had protested at Hyderabad police station, insisting the killers faced the death penalty.

Jaya Bachchan, a former Bollywood star who is now an MP in India's upper house of parliament, said earlier this week that the accused men should be "lynched".

Several other MPs from across the political spectrum also condemned the brutal gang-rape and murder.

Elsewhere in the country, there were other protests and vigils for the victim, who cannot be named under Indian law.

How did the vet's murder happen?

She called family later to say she had a flat tyre, and a lorry driver had offered to help. She said she was waiting near a toll plaza.

Efforts to contact her afterwards were unsuccessful, and her body was discovered under a flyover last Thursday.

Last week, three police officers were suspended when the victim's family accused them of not acting quickly enough when the woman was reported missing.

Officers had suggested she may have eloped, relatives told the National Commission for Women, a government body.

Are women any safer in India today?

Rape and sexual violence against women have been in focus in India since the December 2012 gang-rape and murder of a young woman on a bus in the capital, Delhi.

But there has been no sign that crimes against women are abating.

According to government figures, police registered 33,658 cases of rape in India in 2017, an average of 92 rapes every day.