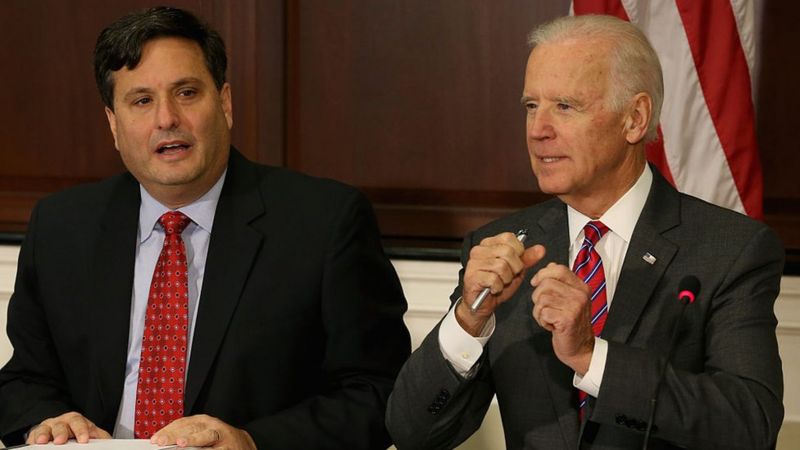 Mr Klain has served as a top aide to Mr Biden since the 1980s in the Senate and later when he was vice-president.

He was played by actor Kevin Spacey in the movie Recount, about the presidential election of 2000.

The White House chief of staff - who manages the president's daily schedule and is often described as his gatekeeper - is a political appointee who does not require confirmation by the Senate.

Mr Biden paid tribute to Mr Klain in a statement issued by his transition team on Wednesday.

"His deep, varied experience and capacity to work with people all across the political spectrum," said Mr Biden, "is precisely what I need in a White House chief of staff as we confront this moment of crisis and bring our country together again."

In the same statement, Mr Klain said he was "humbled" by the president-elect's confidence in him.

"I look forward to helping him and the vice president-elect assemble a talented and diverse team to work in the White House, as we tackle their ambitious agenda for change, and seek to heal the divides in our country," said Mr Klain.

Who is Ron Klain?
He served as chief counsel on the Senate Judiciary Committee from 1989-92 when Mr Biden was chairman. He was also an adviser and speechwriter on Mr Biden's unsuccessful 1988 and 2008 White House campaigns.

Mr Klain served as chief of staff to Mr Biden from 2009 to 2011, the first few years of Mr Biden's tenure as vice-president in the Obama White House.

He later served as President Obama's "Ebola czar" during a minor outbreak of the deadly disease in 2014.

The longstanding Democratic operative was also involved in both of Bill Clinton's presidential campaigns and was an adviser to John Kerry's failed White House run in 2004.

His role as chief of staff to Mr Gore, who retracted his initial concession in the disputed White House election of 2000, was turned into the HBO drama Recount.

"The plural of chad is chad?" Mr Klain, played by Spacey, asks at one point in the film, referring to the fragments of punched ballots that became critical to the tally in Florida.

Mr Klain often tweets about the episode, only last year posting: "People frequently tell me that I should 'get over' the 2000 election and the recount. I haven't, and I don't think I ever will."

After his work on the Gore campaign, Mr Klain worked as a high-powered Washington lobbyist for a mortgage giant and a drugmaker that was under congressional investigation.

Does Klain have any political baggage?
He fell out with the now-president-elect five years ago after throwing in his lot with Mrs Clinton's campaign when Mr Biden, then-US vice-president, still hoped to compete for the party nomination.

"It's been a little hard for me to play such a role in the Biden demise," Mr Klain wrote of the man he had served as chief of staff in an email to Clinton presidential campaign chairman John Podesta in October 2015.

"I am definitely dead to them - but I'm glad to be on Team HRC," he added, using Mrs Clinton's initials.

The message was disclosed by Wikileaks following a hack and Mr Klain refused to comment on the controversy in August when it was reported by news outlet, Politico.

Mr Klain has since worked his way back into Mr Biden's good graces.

The Republican president kept referring to Mr Klain's critical remarks about how the H1N1 swine flu pandemic of 2014-15 had been handled in the US. About 12,500 Americans died, though that disease was much less lethal than Covid-19.

Mr Klain, appearing last year on a panel discussion, said: "We did every possible thing wrong. And it's, you know, 60 million Americans got H1N1 in that period of time. And it's just purely a fortuity that this isn't one of the great mass casualty events in American history."

What is the latest with Biden's transition?
Mr Biden is pressing ahead with preparations to assume the presidency despite Mr Trump's lack of a concession after all major US TV networks projected last Saturday that the Democrat had won the White House race.

But the US Department of State, according to media reports, is not forwarding congratulatory messages to Mr Biden passed through diplomatic channels nor assisting foreign governments trying to contact the president-elect.

This is because the General Services Administration, which helps co-ordinate presidential transitions, is yet to formally recognise the victory.

The state department has in the past helped to facilitate and translate calls between a president-elect and foreign leaders but the Biden team is operating on its own, the BBC's US partner, CBS News, reports.

The president-elect has pledged to shape one of the most diverse presidential cabinets ever.

Vermont Senator Bernie Sanders, who was Mr Biden's biggest rival for the party nomination this year, told CNN on Wednesday he would be interested in becoming secretary of labour. According to the New York Times he is being considered but no deal has been made.

Chris Coons, who took over Mr Biden's Senate seat in Delaware and serves on the Senate foreign relations committee, has been hotly tipped to become secretary of state.

Elizabeth Warren, the Massachusetts senator and former Biden rival for the party nomination, is being talked about as possible treasury secretary. Former Federal Reserve chair Janet Yellen and Atlanta Federal Reserve president Raphael Bostic, who would be the first-African-American in the role, are also names being considered.