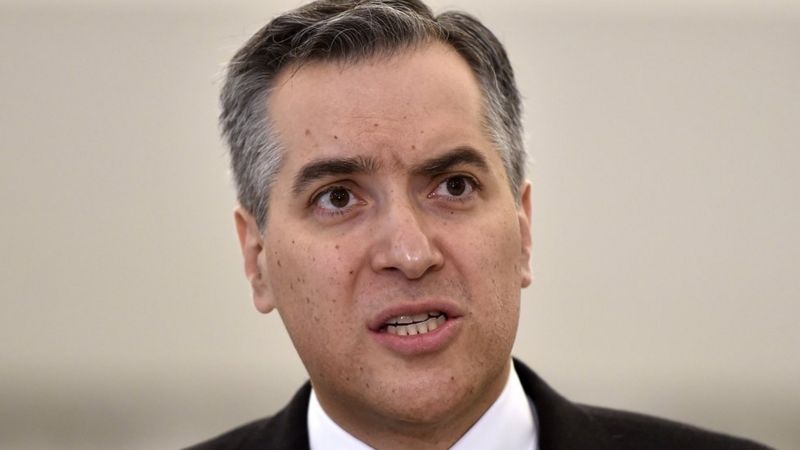 Mr Adib gave no details but reports say difficulties centred on Shia parties seeking to control the finance ministry and pick ministers in the cabinet.

Lebanon - long split along sectarian lines - is in an acute economic crisis.

It is reeling from last month's huge explosion in Beirut which killed at least 190 people and injured 6,000.

The previous Lebanese government resigned amid widespread anger over the blast, which devastated swathes of the capital.

The cause of the disaster was the detonation of 2,750 tonnes of ammonium nitrate that had been stored unsafely in a warehouse at the city's port for six years.

The World Bank has estimated that the explosion caused as much as $4.6bn (£3.4bn) in damage to buildings and infrastructure.

Mr Macron has offered to host an aid conference in mid-October to help.

Why did Mr Adib quit?

Mustapha Adib, Lebanon's former ambassador to Germany, was nominated to the post on 31 August.

He set out saying he wanted an immediate start to reforms and an International Monetary Fund rescue package.

But the Sunni Muslim politician appears to have hit a stumbling block with the main Shia Muslim blocs in Lebanon's parliament.

Analysis: No change without international pressure?

He had the support of a majority of parliament and the endorsement of Emmanuel Macron.

But Shia parties - specifically the Amal movement and Hezbollah - still have the upper hand in politics and the economy in Lebanon, due to their influence in many key sectors including security and finance, and the lack of an equally strong Sunni bloc.

Their critics say that, despite the economic downfall of the country and a nearly bankrupt state, both Shia movements still care more about protecting their own interests.

Many believe that without international pressure and the threat of freezing assets of Lebanese politicians abroad, no-one here will make concessions for a real change.

Mr Adib reportedly insisted on forming a cabinet of technocrats, whilst political factions wanted to have the right to nominate ministers.

After meeting President Michel Aoun on Saturday, Mr Adib said he was "excusing" himself from the task of forming a government.

He apologised to the Lebanese people for his "inability to realise its aspirations for a reformist team" to save the country, but added that he did not want to head a cabinet which "was bound to fail".

An unnamed source close to the French president told Reuters news agency France would not let Lebanon down.

"Adib stepping down amounts to a 'collective betrayal' by Lebanese political parties," the source added.

What is the situation in Lebanon?

Anti-government demonstrators have staged mass rallies for nearly a year, calling for a complete overhaul of the political system.

Power is largely based on sectarian interests in the country, and successive governments have been accused of ineffective and elitist leadership.

Political appointments and many jobs depend on belonging to one of Lebanon's myriad religious communities, a situation which has led to patronage, cronyism and endemic corruption.

Even before last month's explosion, the country was in dire financial trouble as the currency collapsed, unemployment soared and poverty grew.

What role is Emmanuel Macron playing?

The French president visited Lebanon at the start of this month and put pressure on political parties to agree on a non-political cabinet that would begin the task of rebuilding the country and tackling corruption.

Mr Macron also said that he would consider withholding financial aid or imposing sanctions on the ruling elite if there were no real change within the next three months.

He called for credible commitments from party leaders, including a timetable for implementing reforms and parliamentary elections within six to 12 months.

After Saturday's announcement, top Sunni politician and former prime minister Saad al-Hariri warned: "those who applaud the collapse of French President Emmanuel Macron's initiative" would "bite your fingers in regret".

Lebanon came under French control 100 years ago after the defeat of the Ottoman Empire in World War One. The country declared its independence in 1943.