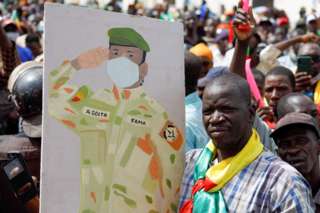 Mali has denied allegations in a UN report that its national army (Fama) carried out human rights violations.

A report by the country’s UN mission, Minusma, released last week highlighted alleged gross rights abuses by the Malian army between January and March this year.

It attributed to Fama an "exponential rise" in abuses, including summary executions and forced disappearances, in its quarterly report on 26 May.

“These allegations are very often tedious, uncross-referenced, reported in non-contradictory ways, and not supported by any tangible evidence," it said.

The ministry said the allegations were intended to" damage the image of the [defence and security forces] and to discredit it vis-a-vis the population and the international community”.

Mali has been at loggerheads with rights agencies over rising reports of abuses by Fama and mercenaries from Russia’s Wagner paramilitary firm.

Hundreds of civilians have reportedly been killed in joint Fama-Wagner counterinsurgency operations that began last December.