Marwa Elselehdar: 'I was blamed for blocking the Suez Canal' 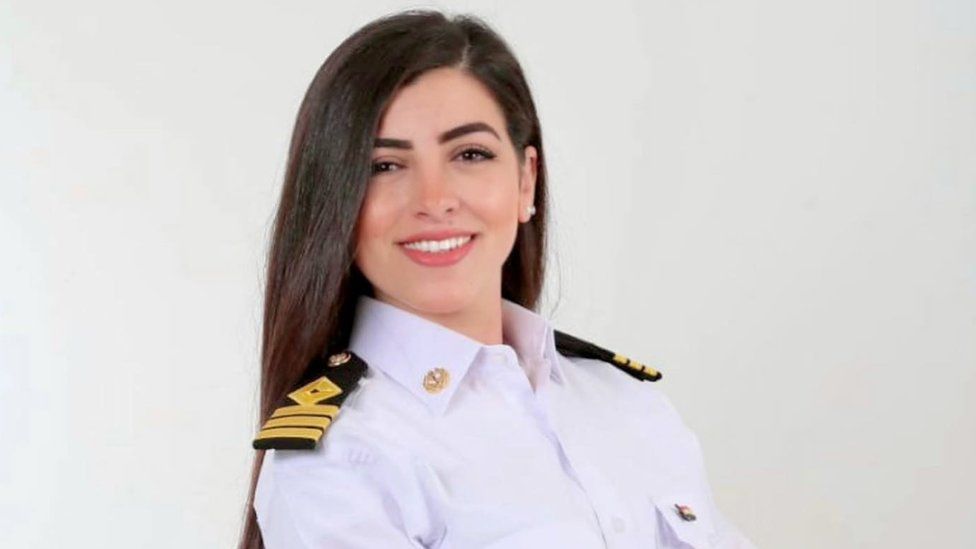 News had broken about a huge container ship, the Ever Given, that had become wedged across the Suez Canal, bringing one of world's major shipping routes to a halt.

But as she checked her phone, online rumours were saying she was to blame.

At the time of the Suez blockage, Ms Elselehdar was working as a first mate, in command of the Aida IV, hundreds of miles away in Alexandria.

The vessel, owned by Egypt's maritime safety authority, runs supply missions to a lighthouse in the Red Sea. It's also used to train cadets from the Arab Academy for Science, Technology and Maritime Transport (AASTMT), a regional university run by the Arab League.

Rumours about Marwa Elselehdar's role on the Ever Given were largely spurred by screenshots of a fake news headline - supposedly published by Arab News - which said she was involved in the Suez incident.

The doctored image appears to be from a genuine Arab News story, released on 22 March, which profiles Marwa's success as Egypt's first female ship captain. The picture has been shared dozens of times on Twitter and Facebook.

Several Twitter accounts under her name have also spread false claims that she was in involved with the Ever Given.

Marwa Elselehdar, 29, told the BBC she has no idea who first spread the story or why they did it.

"I felt that I might be targeted maybe because I'm a successful female in this field or because I'm Egyptian, but I'm not sure," she said.

It's not the first time she's faced challenges in an industry historically dominated by men. At present, women only account of 2% of the world's seafarers, according to the International Maritime Organisation.

Marwa says she's always loved the sea, and was inspired to join the merchant navy after her brother enrolled at the AASTMT.

Though the academy only accepted men at the time, she applied anyway and was granted permission to join after a legal review by Egypt's then-President Hosni Mubarak.

During her studies, Ms Elselehdar says she faced sexism at every turn.

"Onboard, they were all older men with different mentalities, so it was difficult not to be able to find like-minded people to communicate with," she says. "It was challenging to go through this alone and be able to overcome it without affecting my mental health."

"People in our society still don't accept the idea of girls working in the sea away from their families for a long time," she adds. "But when you do what you love, it is not necessary for you to seek the approval of everyone."

After graduating, Marwa rose to the rank of first mate, and captained the Aida IV when it became the first vessel to navigate the newly-expanded Suez Canal in 2015. At the time, she was the youngest and first female Egyptian captain to cross the waterway.

In 2017 she was also honoured by President Abdel Fattah El-Sisi during Egypt's Women's Day celebrations.

When rumours emerged about her role in the Suez blockage, she feared for the impact it would have on her work.

"This fake article was in English so it spread in other countries," says Ms Elselehdar. "I tried so hard to negate what was in the article because it was affecting my reputation and all the efforts I exerted to be where I am now."

But she says she feels encouraged by some of the response.

"The comments on the article were very negative and harsh but there were so many other supportive comments from ordinary people and people I work with," she says. "I decided to focus on all the support and love I'm getting, and my anger turned to gratefulness."

"Also, it is worth mentioning that I became even more famous than before," she adds.

Next month Marwa Elselehdar will be taking her final exam to attain a full rank of captain, and hopes she can continue to be a role model for women in the industry.

"My message to females who want to be in the maritime field is fight for what you love and not let any negativity to affect you," says Marwa.