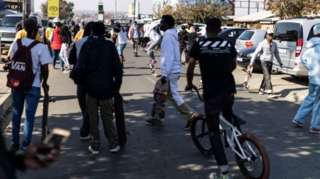 A new survey suggests that two thirds of young African people are not optimistic about the direction of their country or continent - but remain positive about their personal futures.

Researchers conducted more than 4,000 face-to-face interviews across 15 countries for the African Youth Survey.

More than half said they wanted to emigrate in the next few years, while nearly 80% planned to start their own business.

About three quarters of the participants said they saw China as the strongest foreign power on the continent eclipsing the US which had previously held the role.