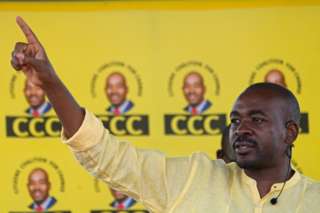 Zimbabwe's new opposition party, the Citizens' Coalition for Change, faces its first test at the polls with a series of votes across the country.

By-elections are being held in 28 parliamentary constituencies (about a 10th of the total), as well as contests for local council seats.

The party, led by Nelson Chamisa, has complained that some of its rallies have been violently disrupted by supporters of the ruling party, Zanu-PF.

It has also pointed to irregularities in voters' rolls.

The votes are being seen as a rehearsal for a general election in Zimbabwe next year.

The Citizens' Coalition for Change was created following splits within the long-standing opposition party, the Movement for Democratic Change.