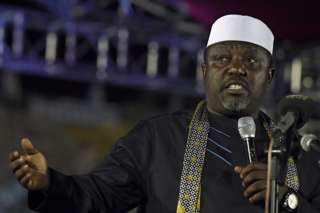 Nigeria’s anti-corruption agency has arrested a presidential aspirant of the ruling APC party just days to the party’s presidential primaries.

The Economic and Financial Crimes Commission (EFCC) arrested Rochas Okorocha in the capital, Abuja, on allegations of corruption involving diversion of 2.9 billion naira ($7m; £5.6m) of public funds and property.

The alleged offences were committed during his tenure as governor of the south-eastern state of Imo between 2011 and 2019. He has previously denied the accusations.

The 59-year-old politician is currently a senator. He is being detained by the EFCC.

Reports indicate there was a stand-off for hours between some of Mr Okorocha supporters and operatives of the anti-graft agency during the arrest at his residence.

His supporters say the arrest is an attempt to frustrate his presidential ambition.

But in a statement, EFCC said it was "left with no option" after Mr Okorocha had jumped the bail it granted him and also failed to honour invitations for questioning.

The EFCC has mounted a crackdown on corruption that has so far seen the arrest of the country’s accountant-general - who denies any wrongdoing.

Nigeria is due to hold elections in February next year to choose a successor to President Muhammadu Buhari, whose second term will end in May.