Nigeria elections 2023: What you need to know 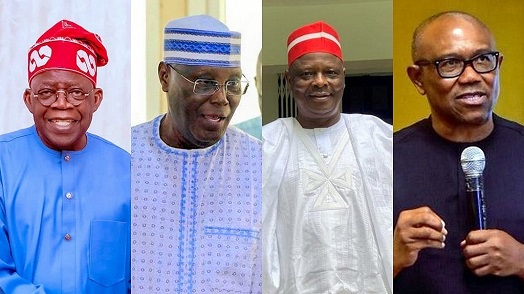 Next month voters in Africa's most populous country, Nigeria, will head to the polls to select their next president amid mounting unhappiness in the country due to worsening insecurity and economic hardship. Will any of the frontrunners, most of whom have been in the political system for decades, be able to turn the country around?

His supporters say he has done his best and highlight achievements, such as his work on infrastructure projects and attempts to combat violent extremism. But even his own wife, Aisha Buhari, has apologised to the Nigerian people for falling short of their expectations.

So whoever wins the election will not have an easy job.

When is the election?

It is due to take place on Saturday 25 February 2023. If there is no clear winner, a second round will be held within three weeks. There will also be elections for the country's powerful state governors on Saturday 11 March.

The head of the election commission has dismissed suggestions that the vote could be delayed because of insecurity.

Who is running for president?

A total of 18 candidates are campaigning for the top job, but only three have a realistic chance of winning, according to opinion polls.

Bola Ahmed Tinubu, 70, is standing for the governing All Progressives Congress (APC) party. Known as a political godfather in the south-west region, he wields a huge amount of influence but has been dogged by allegations of corruption over the years and poor health, both of which he denies. Some say his campaign slogan Emi Lokan, which means "it's my turn [to be president]" in the Yoruba language, shows a sense of entitlement.

Atiku Abubakar, 76, is running on behalf of the main opposition People's Democratic Party (PDP). He has run for the presidency five times before - all of which he has lost. Most of his career has been in the corridors of power, having worked as a top civil servant, vice-president under Olusegun Obasanjo and a prominent businessman. Just like Mr Tinubu, he has been accused of corruption and cronyism, which he denies.

Peter Obi, 61, is hoping to break up the two-party system which has dominated Nigeria since the end of military rule in 1999 and is running for the little known Labour Party. Although he was in the PDP until last year, he is seen as a relatively fresh face and enjoys fervent support on social media and amongst Nigeria's youth. The wealthy businessman served as governor of the south-eastern Anambra State from 2006 to 2014. His backers, known as the "OBIdients" say he is the only candidate with integrity, but his critics argue that a vote for Obi is wasted as he is unlikely to win.

Who is likely to win?

Convention suggests a candidate from one of the two main parties will win - Mr Atiku or Mr Tinubu. But Mr Obi's supporters are hoping he can spring a surprise if they can mobilise the large youth vote to back him.

How does the election work?

In order to win, a candidate has to obtain the highest number of votes nationwide, and more than a quarter of ballots cast in at least two-thirds of Nigeria's states.

If none of the candidates manage this, there will be a second round, or a run-off, within 21 days between the top two candidates.

What are the main issues?

Reducing insecurity is one of the key concerns of voters, in a country which is currently experiencing a kidnapping-for-ransom crisis and battling a militant Islamist insurgency in parts of the north.

Two of the most shocking cases last year were a mass shooting at a Catholic Church in Owo and the storming by gunmen of a passenger train in which dozens of people were killed or kidnapped.

President Buhari says he has fulfilled his promise to "frontally and courageously tackle terrorism", but many Nigerians feel the country is still not safe.

The economy is another area of concern. In 2022 inflation rose for 10 months in a row, just dipping to 21.3% according to the latest figures released this month. This rising cost of living has left many families struggling to make ends meet, with local media describing the situation as "dire".

Unemployment is also a major problem, leaving many graduates fearful that they may not find work even after years of university study. Latest figures from the country's National Bureau of Statistics show that 33% of the population is unemployed - jumping to 42.5% for younger adults.

Despite being a major oil producer, four out of 10 Nigerians live below the poverty line and "lack education and access to basic infrastructure, such as electricity, safe drinking water, and improved sanitation," according to the World Bank.

Many of the candidates have put these issues at the centre of their campaigns.

But these problems have been mounting for several years, leaving some Nigerians sceptical about whether whoever wins the election will actually be able to fix them. Despite the large number of registered voters - 93.5 million - concerns persist about apathy and how many people will actually show up on the day to cast their ballot.

With almost 40% of registered voters under 34, the vote has been called the "election of young people" by elections chief Mahmood Yakubu.

Will the vote be free and fair?

In previous elections in Nigeria there have been credible reports of politicians rigging the polls, by either causing violence to scare away voters or snatching ballot boxes and stuffing them.

But the Independent National Electoral Commission (Inec) says the use of new technology will help ensure the ballot is secure and is not marred by fraud or rigging.

There have also been cases of politicians paying poor voters to back them, even at polling stations.

But a recent change of the naira notes has forced a cash crunch that will make vote-buying difficult, and security agents also arrest suspects who either give or receive money.

Inec has also said it is illegal for voters to take phones into the polling booths and take pictures of their ballot papers, as this proof is usually demanded by the vote buyers.

Some Inec offices have been attacked in the run-up to the vote. Last November the election body held an emergency meeting over the attacks on its buildings, which local media described as a "disturbing trend".

There have also been complaints about suspicious voter registration. Last year digital sleuths uncovered voter cards on the digital electoral register that appeared to have pictures of children on them. The legal age to vote in Nigeria is 18.

Some others on the preliminary list seemed to have registered more than once, by changing their facial expression, clothes or the way they were sitting.

At the time of the discoveries, Inec said it welcomed the help of Nigerians to clean up the register.

On 11 January, Inec released a new register, from which it said 53,264 ineligible voters had been removed. It also said that underage voters and vote buyers would be prosecuted.

What other elections are being held?

As well as the presidential vote, the public will also be choosing their representatives for parliament - the National Assembly.

There are 469 legislators made up of 109 Senators and 360 members of the House of Representatives.

Two weeks later on 11 March there will also be elections to choose governors for 28 out of Nigeria's 36 states.

What do you need to vote?

In order to vote, you need to have a valid Permanent Voter's Card (PVC), which essentially shows that you are registered to vote and proves the identity of the voter.

The PVC contains biometrical data of the voter, used as further verification on election day. This data is stored in the card.

However, there is limited time, as the deadline for getting a PVC is 29 January.

Nigerians living in the diaspora are not allowed to vote abroad.

This election is different to previous ones because a new system is being used - the Bimodal Voter Accreditation System (BVAS), which is a device introduced by Inec in 2021 aimed at stopping election fraud.

The BVAS is essentially a small rectangular box with a screen that is more technologically advanced than the Smart Card Readers used in the past.

The key benefit of the BVAS is that it has the capacity to perform dual identification of voters on election day through their fingerprints and facial recognition. This should stop people without valid PVCs from voting, as well as those who are ineligible to vote attempting to do so.

Another aspect of the BVAS is that it uploads vote results directly to the Inec results viewing portal for all to see, which in theory means results cannot be tampered with.

There have been concerns about the BVAS after it experienced glitches in state-wide elections in 2021 and 2022, but Inec insists these problems have been resolved.

When will we get the results?

In the last two presidential elections the winner has been known on the third day after voting.

But votes will be counted as soon as voting ends on Saturday 25 February. Those who stay behind at their polling station will have the result announced to them, but it is a long process before all the results work their way up to Abuja from the tens of thousands of polling units across the country.

BVAS might speed up the process this year, but Inec-appointed officials will still have to travel to Abuja from the 36 states with hard copies to be read aloud.

Only then will the Inec chairman announce a winner - or that a second round is needed.