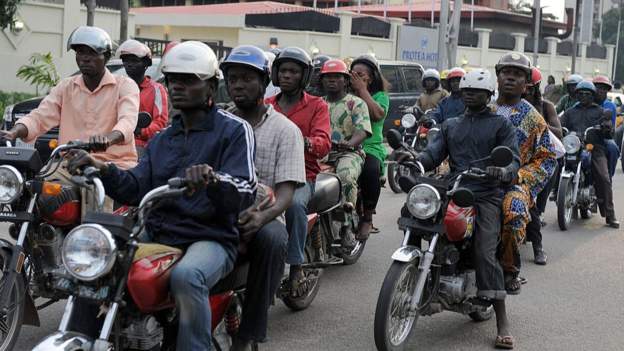 Nigeria's business capital, Lagos, plans to ban motorcycles and tricycles - the city's most common forms of transport - from its major roads.

The Lagos state government said the ban is as a result of deaths and disorderliness caused by motorcycles, locally referred to as okadas, and tricycles, known as kekes.

It will take effect on 1 February and will be enforced on all major highways and bridges. It will be extended to other areas after an impact assessment is done.

City official Gbenga Omotoso is quoted by local media as saying the motorcycles and tricycles will not be allowed in the state capital Ikeja, Lagos Mainland, Lagos Island, Apapa, Surulere and Eti Osa areas.

Nigerians online have protested against the ban, with some saying motorcycles help them beat the heavy traffic in Lagos.

Okada/Motorcycle has saved me several times from missing shows and flights due to heavy lagos traffic! If dem ban am, na the end be that o 😩😩😩.... plenty show refunds 😂😂

lagos State banning Keke and Okada in key parts of the state means they aint ready to save the state from the Traffic malaise.

Opay been saving Lagosians from undue Traffic since i can remember.

I don't even know what even informed this decision

Why will the Lagos state government have to ban okada and keke knowing fully well that they are the only alternative to use during traffic.
The lagos government has failed Lagosians .
They have remove food from people mouth and increase the rate of poverty and unemployment
😔😔😔