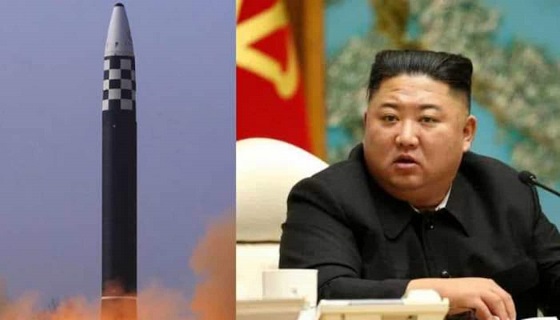 North Korea has fired a suspected missile over Japan, in what appears to be a deliberate escalation to get the attention of Tokyo and Washington.

The ballistic missile travelled about 4,500km (2,800 miles) before falling into the Pacific Ocean - far enough to hit the US island of Guam if it took another trajectory.

It is the first North Korean missile launch over Japan since 2017.

The launch saw Japan issue a rare alert to some citizens to take cover.

The UN prohibits North Korea from testing ballistic and nuclear weapons. Flying missiles towards or over other countries without any pre-warning or consultation also contravenes international norms.

Most countries avoid doing it completely as it can easily be mistaken for an attack. While it is not as big as a nuclear test - which could be next - it can be considered hugely provocative.

People in the north of Japan, including Hokkaido island, reportedly woke up to the noise of blaring sirens and text alerts which read: "North Korea appears to have launched a missile. Please evacuate into buildings or underground."

As the missile flew overhead, they were warned to look out for falling debris.

Officials later said the intermediate-range ballistic missile fell into the Pacific Ocean far from Japan, and there were no reported injuries.

It had covered the longest distance ever travelled by a North Korean missile, and reached a height of around 1000km - higher than the International Space Station.

Japan's Prime Minister Fumio Kishida described the launch as "violent behaviour", while defence minister Yasukazu Hamada said Japan would not rule out any options to strengthen its defences including "counterattack capabilities".

The US National Security Council spokesperson Adrienne Watson called it a "dangerous and reckless decision" that was "destabilising" to the region.

The launch comes as Japan, the US and South Korea have been working together to strengthen their defences, in response to the growing threat posed by the North.

Last week, the three countries conducted naval exercises together for the first time since 2017. Such drills have long antagonised Pyongyang leader Kim Jong-un, who views them as proof that his enemies are preparing for war.

Following the combined exercises in 2017, North Korea fired two missiles over Japan in response. A week later, it conducted a nuclear test.

Recent intelligence has suggested that North Korea is getting ready to test another nuclear weapon.

It is expected that North Korea would wait till after China - its main ally - holds its Communist party congress later this month.

But some experts are now asking if it could come sooner than expected - they believe Tuesday's launch shows that North Korea is preparing the ground for a nuclear test.

The missile launch is the fifth carried out by Pyongyang in a week. On Saturday, two rockets came down in waters outside Japan's exclusive economic zone.

Many of North Korea's missile tests are conducted on a high, lofted flight path - reaching a high altitude, avoiding flights over its neighbours.

But firing over or past Japan allows North Korean scientists to test missiles under circumstances "that are more representative of the conditions they'd endure in real-world use", analyst Ankit Panda told news agency Reuters.

These actions have contributed to enduring tensions between North Korea and Japan, rooted in Japan's previous colonisation of Korea from 1910 to 1945 and the North's abduction of Japanese citizens in the past.

Earlier this month, North Korea passed a law declaring itself to be a nuclear weapons state, with leader Kim Jong-un ruling out the possibility of talks on denuclearisation.

The East Asian state regularly defies the ban on nuclear and missile tests, saying it needs to bolster its defences.