North Korea: Kim Jong-un's sister warns US not to 'cause a stink' 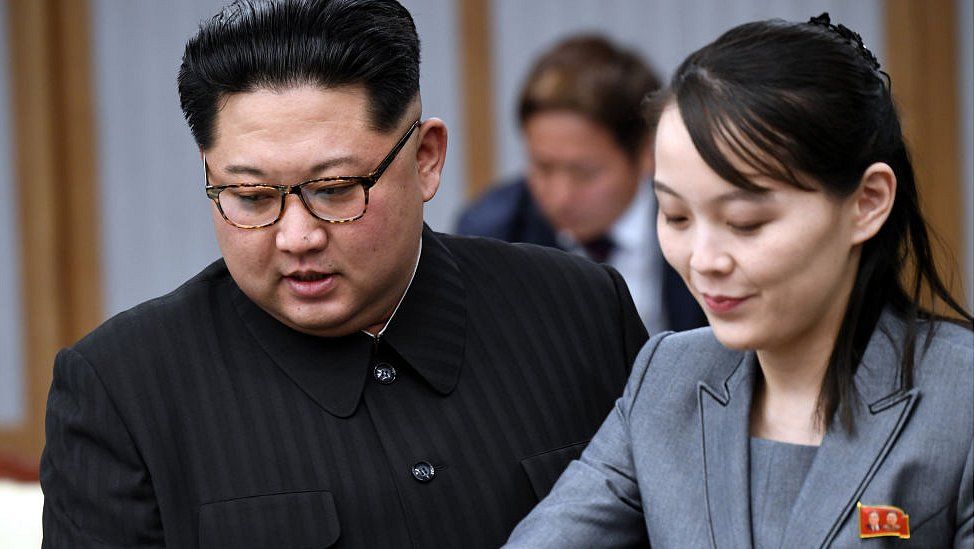 The influential sister of North Korean leader Kim Jong-un has warned the US not to "cause a stink", as President Joe Biden prepares to set out his Korean policy.

In remarks on state media, Kim Yo-jong criticised the US and South Korea for conducting joint military exercises.

Her comments come a day before top US officials are due to arrive in Seoul.

The US government has said it has been trying for weeks to make diplomatic contact with North Korea.

Pyongyang has yet to acknowledge that President Biden is now in office.

The two countries remain at loggerheads over the North's nuclear and ballistic missile programmes.

Kim Yo-jong was quoted in the official Rodong Sinmun newspaper as saying: "A word of advice to the new administration of the United States that is struggling to spread the smell of gunpowder on our land from across the ocean.

"If it wants to sleep in peace for coming four years, it had better refrain from causing a stink at its first step."

She reiterated her country's opposition to the joint military exercises - which North Korea describes as preparations for invasion - saying: "The South Korean government yet again chose the 'March of War', the 'March of Crisis'."

Kim Yo-jong is the younger sister of Kim Jong-un and the only one of his siblings considered a close and powerful ally.

Analysis box by Laura Bicker, Seoul correspondent
Many of us in Seoul have been expecting this. North Korea usually reacts when South Korea and the US carry out joint military exercises. Sometimes that is in the form of a missile test. On other occasions, such as this one, it responds to the so-called "war games" with a string of angry words.

Kim Yo-jong has been her brother's favoured attack dog for a while and this statement is no exception. She aims at two targets in her remarks: the joint drills and the visit to Seoul by US Secretary of State and Defence Chief.

It at least lets Washington and Seoul know Pyongyang is watching and listening, despite not responding to the recent back-channel attempts by the White House.

Kim Yo-jong didn't elaborate on exactly what North Korea would do if it didn't like what it heard during these meetings. But she is saying - you have been warned.

line
North Korea's nuclear ambitions are expected to be high on the agenda during this week's visits to South Korea and Japan by US Secretary of State Anthony Blinken and Defence Secretary Lloyd Austin.

Mr Biden has already announced a policy review on North Korea, which is expected to be unveiled next month.

During the election campaign he called Mr Kim "a thug" and said North Korean nuclear disarmament had to happen before US and UN economic sanctions could be relaxed.

Relations between the US and North Korea plummeted in 2017, when the North tested long-range missiles capable of hitting American cities.

But much-trumpeted meetings - including summits in Singapore and Vietnam - failed to break the impasse over nuclear disarmament and sanctions.