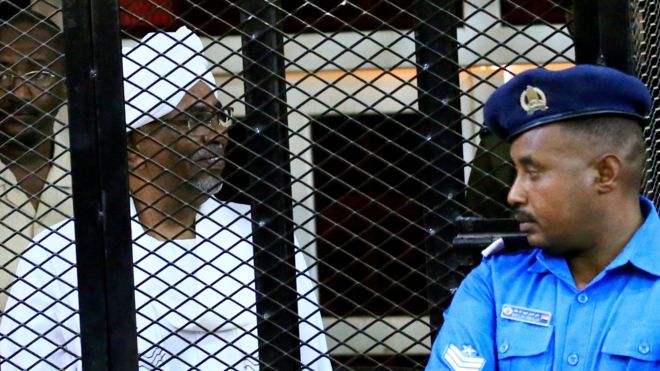 Sudan's rulers have agreed to hand over ex-President Omar al-Bashir to the International Criminal Court (ICC) to face genocide and war crimes charges.

Bashir is accused of serious crimes in a conflict that broke out in Darfur in 2003 and led to the deaths of 300,000.

Authorities said the former president, and others charged by the ICC, should appear at The Hague to face a tribunal.

The commitment came at peace talks between Sudan's government and rebel groups from the Darfur region.

"Justice cannot be achieved if we don't heal the wounds," said Mohammed Hassan al-Taishi, a spokesman for the Sudanese government.

He told BBC Focus on Africa radio that Bashir and three others would be handed over to the ICC.

Asked if supporters of the ousted president would accept this decision, Mr Taishi replied that no-one was above justice.

"We are doing what the Sudanese people asked us to do," he added.

Mr Taishi stressed that he was expressing the view of the government, which includes powerful generals in the military, and not his personal view.

Mr Taishi is a civilian member of Sudan's sovereign council, the body overseeing the country's transition to democracy.

A step towards peace?
Analysis by Mohanad Hashim, BBC Sudan

The Sudanese delegation negotiating with rebels in Darfur has made a key concession to victims of the Darfur conflict by agreeing that all those wanted by the ICC should be transferred to the court in The Hague to stand trial.

The surrender of former President Bashir is, in fact, something that Sudan's top military general Abdel Fattah al-Burhan alluded to at a meeting in December with victims of the conflict.

But there is no guarantee that it will happen - the generals may renege on the deal.

And if it does happen, it is unlikely to be anytime soon, as talks to end the conflict still have a long way to go and the transfer of the wanted men - from both sides of the conflict - would have to be part of a broader peace deal.

Bashir, who refused to recognise the authority of the court when he was charged for crimes in the region in 2009, was ousted as president in April last year.

On Tuesday, one of his lawyers told Reuters news agency that Bashir would continue to refuse to deal with the ICC, describing it as a "political court".

ICC prosecutors in The Hague requested that the former leader stand trial over the Darfur killings and issued an arrest warrant for him on charges of genocide, war crimes and crimes against humanity.

The UN says that in addition to those killed in fighting between local armed groups, and Bashir's forces and government-backed militia - such as the infamous Janjaweed - around 2.5 million people were displaced in the war.

What is the ICC?

The court investigates and brings to justice people suspected of genocide, crimes against humanity and war crimes, intervening when national authorities cannot or will not prosecute.

The ICC was established by a UN treaty in 2002, and has been ratified by 123 countries, including the UK.

However, several countries - including China, India, Russia and the US - have refused to join, while some African countries say the court is unfairly focused on Africans.

The international court has been criticised in the past for securing too few convictions, mishandling cases and over-reaching its jurisdiction.

Bashir, 76, came to power in a military coup in 1989 and ruled Sudan with an iron fist.

In December, he was sentenced to two years in a social reform facility for corruption. Under Sudanese law, people over the age of 70 cannot serve jail terms.

Prosecutors in Sudan have also charged him with the killing of protesters during the demonstrations that led to him being ousted.

Bashir denies all allegations against him.