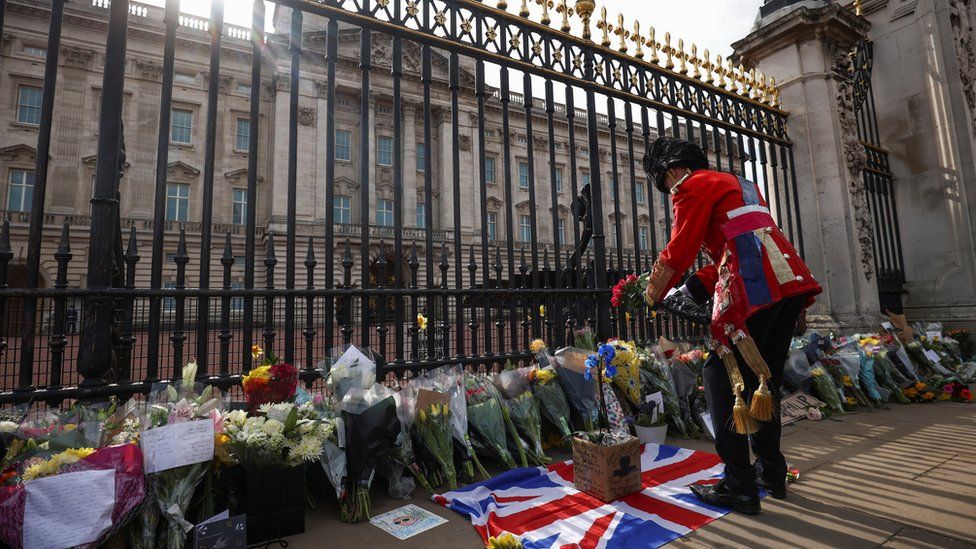 Gun salutes to mark the death of the Duke of Edinburgh are due to take place later across the UK, in Gibraltar and from warships at sea.

Aged 99, he was the longest-serving royal consort in British history.

Saluting batteries will fire 41 rounds at one round every minute from 12:00 BST in cities including London, Edinburgh, Cardiff and Belfast, the Ministry of Defence said.

Royal Navy ships at sea, including HMS Diamond and HMS Montrose, will also fire the salute in honour of the duke, who served as a naval officer during World War Two and held the office of Lord High Admiral.

The salutes will be broadcast online and on TV, and the public are encouraged to observe them from home.

Announcing the duke's death on Friday, Buckingham Palace said: "It is with deep sorrow that Her Majesty the Queen announces the death of her beloved husband.

"The Royal Family join with people around the world in mourning his loss."

Reflecting on Prince Philip's life for a BBC programme, the Prince of Wales described his father's life as an "astonishing achievement".

First Sea Lord and Chief of the Naval Staff Admiral Sir Tony Radakin, the most senior officer in the Royal Navy, praised the duke's "empathy, affection and engagement" with the fleet.

"His deep understanding of our values, standards and ethos made him such a close friend to the service for over eight decades," he said.

General Sir Nick Carter, Chief of the Defence Staff, added the duke had been a "great friend, inspiration and role model" for the armed forces.

"A life well lived, His Royal Highness leaves us with a legacy of indomitable spirit, steadfastness and an unshakeable sense of duty," Sir Nick said.

Similar salutes were fired to mark the death of Queen Victoria in 1901 and Winston Churchill in 1965.

Final details of the duke's funeral are also expected to be released this weekend.

The funeral will take place at St George's Chapel, Windsor, but the arrangements have been amended in light of the coronavirus pandemic, the College of Arms said in a statement.

The duke will not have a state funeral and there will be no lying-in-state, in line with his wishes, it added.

Members of the public are "regretfully" requested not to attend due to the pandemic, and it is understood the Queen is considering modified funeral and ceremonial arrangements.

All UK government buildings have been told to fly official flags at half-mast in tribute to the duke until 08:00 on the day after the duke's funeral.

Westminster Abbey tolled its tenor bell once every 60 seconds for 99 times from 18:00 on Friday, to honour each year of the duke's life.

And ahead of the Grand National later, a two-minute silence will be held at Aintree Racecourse in memory of the duke, who was an honorary member of the Jockey Club.

On land, on sea, in the capitals of the four nations and at Royal Navy bases, guns will ring out at midday to remember the Duke of Edinburgh.

As well as marking Prince Philip's death, this will be a moment to remember his military service, active service in the World War Two and honorary commands for many decades after it.

Later in the day the Palace is expected to release details about the days to come and the duke's funeral.

There will be no lying-in-state and no state funeral.

Covid restrictions will mean little or no public involvement; the Palace has asked people to avoid gathering outside residences or laying flowers.

The duke had little time for high ceremony; there will be precious little of it as he is remembered over the next few days.

In a BBC programme aired on Friday night, Philip's children shared their reflections on their father's life, with the Prince of Wales calling his legacy an "astonishing achievement".

Prince Charles said: "His energy was astonishing in supporting my mama [the Queen] - and doing it for such a long time, and, in some extraordinary way, being able to go on doing it for so long.

"What he has done has amounted to an astonishing achievement, I think."

Princess Anne said the duke "treated everyone as an individual, and gave them the respect he felt they were due as individuals".

Politicians across the UK also paid tribute to the duke, and parties suspended their campaigning for elections on 6 May.

Parliament will honour the duke on Monday, with the House of Commons sitting at 14:30 for tributes following his death.

Prime Minister Boris Johnson said the duke had "earned the affection of generations here in the United Kingdom, across the Commonwealth, and around the world".

Northern Ireland's First Minister Arlene Foster said he was "widely respected for his active and dedicated service to the country", while Deputy First Minister Michelle O'Neill said she wished to "acknowledge the sense of loss felt" by "those of a unionist tradition and of British identity".

International leaders also remembered Philip and sent their condolences to the Queen.

US President Joe Biden and First Lady Jill Biden said in a statement the duke "gladly dedicated himself to the people of the UK, the Commonwealth, and to his family".

The announcement also saw members of the public gather outside Buckingham Palace and Windsor Castle to pay their respects.