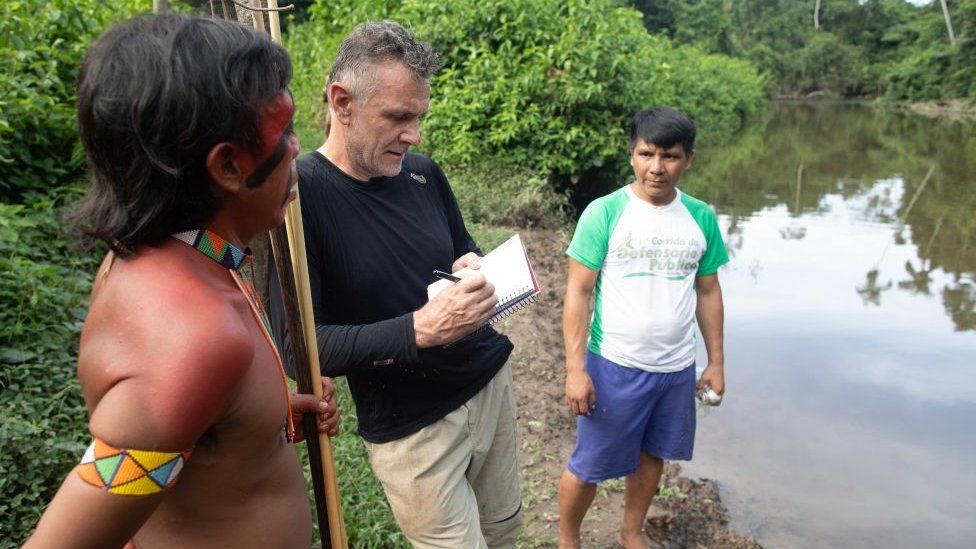 The remains of one of the two bodies found in the Amazon rainforest are those of UK journalist Dom Phillips, Brazilian police have confirmed.

They say the identification was based on dental records.

The second body - believed to be that of indigenous expert Bruno Pereira - is still being examined.

Mr Phillips, 57, and Mr Pereira, 41, were first reported missing on 5 June. Earlier this week, a suspect confessed to burying the bodies.

The suspect was later named as Amarildo da Costa de Oliveira. The police said he had explained in detail how both men were killed before leading officers to the place where their bodies were buried.

Human remains were then dug up.

The suspect's brother, Oseney da Costa de Oliveira, has also been arrested in connection with the killings, but denies any involvement.

On Friday police announced that they had issued an arrest warrant for a third suspect - Jeferson da Silva Lima, whose whereabouts are currently unknown.

After the first suspect's confession, Dom Phillips' family said they were "heartbroken".

Speaking on Radio 4's Today programme Mr Phillips' sister Sian Phillips said his family had been aware there were risks but that her brother had under played them to an extent.

"I think he was a leading light in journalism, he was shining a light on an area which is a global problem," she said, adding that he had wanted to tell the stories of the indigenous people who live in the Amazon.

Her husband, Paul Sherwood, said the family wanted justice which made it "possible for journalists and protectors of the rainforest to feel safe in continuing to report from and to help the indigenous people".

He said the family were almost certain that the pair were attacked by people "involved in illegal fishing" but said what they wanted to know was whether they were acting alone or with the involvement of "other powerful people".

Mr Sherwood said that drug trafficking and organised crime was involved with illegal fishing in the region.

Brazilian police said they did not believe the suspects were acting as part of an organised criminal gang.

"The investigations indicate that the killers acted alone, with no bosses or criminal organisation behind the crime," police said, according to Reuters news agency.

But local indigenous rights group Univaja, which played a central role in the search for the men, said the circumstances suggested the opposite - that a criminal gang was likely involved.

The group said: "The cruelty of the crime makes clear that Pereira and Phillips crossed paths with a powerful criminal organisation that tried at all costs to cover its tracks during the investigation."

It added that it had informed the federal police about the operation of such a group in the Javari Valley on several occasions in the past few years.

The pair went missing in the valley, a remote region in Brazil's far west, which is home to thousands of indigenous people from more than 20 groups. It is a refuge for these indigenous groups, who live in isolation from the outside world.

Mr Pereira had been introducing the journalist - who was writing a book on the Amazon - to contacts and acting as his guide when their boat failed to arrive at an expected point near the border with Peru.

Why is the Javari valley so dangerous?
Experts say the area has become a hotbed for crime because of its remoteness and a lack of government oversight.

As well as clashes with poachers catching protected fish, it has also seen incursions by illegal gold-miners, loggers and drug-traffickers who smuggle cocaine from nearby Peru and Colombia.

Violence has also grown as drug-trafficking gangs battle for control of the area's waterways to smuggle cocaine.

The region - which is about the size of Portugal - is known for violent conflicts between these various criminal groups, government agents and indigenous people. It was these conflicts that Mr Phillips and Mr Pereira were documenting.

And days before the pair went missing, indigenous groups say Mr Pereira was threatened for campaigning against illegal fishing. He had repeatedly reported being threatened by loggers, miners and illegal fishermen in the past.

The search for the missing pair was initially criticised by relatives and campaign groups, who called on officials to act more quickly and broaden its scope.

As global outrage grew at the disappearance, the 10-day search expanded until it involved the army, navy and police.

The police also initially failed to praise the work of the indigenous communities who searched for the men and helped lead authorities to some of their belongings.

When asked by the BBC why there was no mention of the local communities helping, they admitted it was an error and conceded that their support had been crucial.