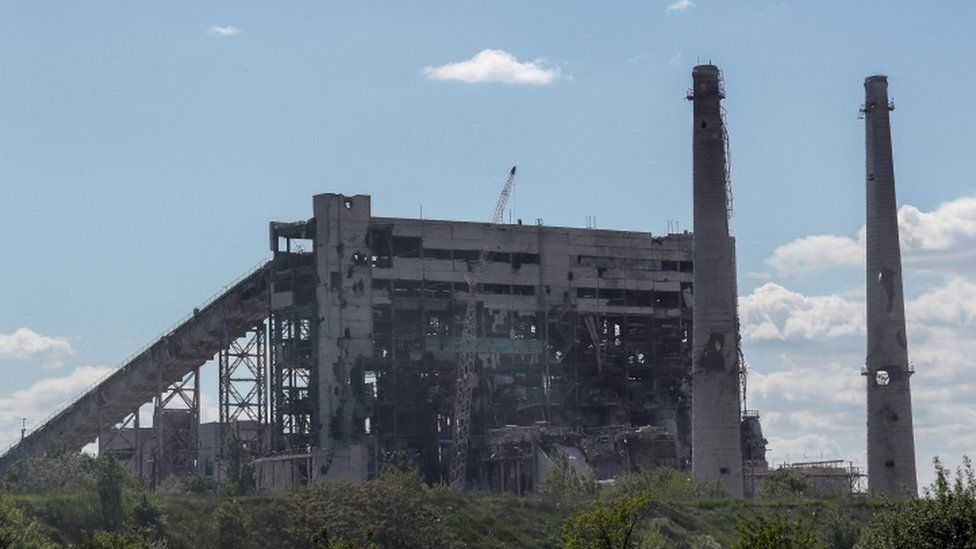 Russia is looting $600m (£500m) worth of steel from plants and ports in Ukraine, according to the boss of Ukraine's largest steel firm Metinvest.

The firm owns the Azovstal plant that became the last holdout of Ukrainian soldiers and civilians during the devastation of the city of Mariupol.

Chief executive Yuriy Ryzhenkov said steel was being transferred to Russia and sold on, some of which had been bound for customers in the UK.

The Kremlin has not commented.

'Stealing from the Europeans'
Metinvest is headquartered in Mariupol, a centre for trade and manufacturing, which after almost three months of relentless assault, fell to Russia in May.

Mr Ryzhenkov said 300 employees and 200 employees' relatives were killed in the assault on the Azovstal plant, which together with its sister plant Ilyich accounted for 40% of all Ukraine steel production.

Thousands of tonnes of steel had been paid for by European customers, including some in the UK.

He said that public sources and the company's own informants reported the steel was being transferred to Russia and sold in internal markets or to countries in Africa and Asia.

He said the company was documenting as much of the theft as possible and was preparing to take future legal action.

"At some point in time, the Russians will be facing not only the international courts, but also the criminal courts. And we will be going after them with anything we have."

The BBC has approached the Russian Ministry of Defence for comment, but it has not responded to the accusations.

Prof Marko Milanovich, an expert on international law at the University of Reading, says there are a number of options to pursue a case, but prospects for success are less certain.

"Whichever legal options Metinvest chooses, it's a very difficult process and whilst looting is unfortunately quite common in conflict, suing the looting state and obtaining compensation is very, very rare indeed," he told the BBC.

"However, they might want symbolic satisfaction more than the money, and labelling Russia as a law breaker would be a big deal."

Contributing to war effort
Last month, the BBC's Reality Check team tracked where Russia is taking grain stolen from Ukraine, following mounting evidence that Russian forces in occupied areas have been steeling produce from local farmers and shipping it out of the country.

Like many Ukrainian companies, Metinvest has become a part-military, part-humanitarian organisation. Mr Ryzhenkov said his steel workers had become as important as soldiers to the Ukrainian war effort.

Although the Azovstal plant was virtually destroyed in the Russian siege, he said he was confident the day would come when it would be a Ukrainian-owned facility again.

But wouldn't that require a major military offensive by stretched Ukrainian forces?

"Was there a big offensive when Germany reunited with East Germany? There are several ways in which Ukraine can take it back. One of the ways is a big military offensive, another way is that Russia will just have to get out because of some internal things in Russia. Or finally, there is a third way that in some point in history will just be reunited."

Mr Ryzhenkov said the siege of Azovstal would be remembered as one of the defining moments of this war.