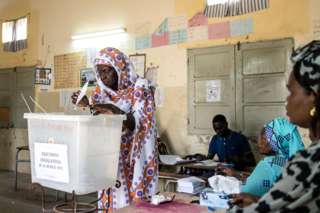 The ruling coalition of President Macky Sall in Senegal has claimed victory in the country's parliamentary elections.

The former prime minister, Aminata Touré, said on television that the coalition had won 30 of the country's 45 administrative departments, giving it a slim parliamentary majority.

However, the leader of the main opposition coalition, the mayor of the capital Dakar, has contested the claim.

Barthelemy Dias said it was not Ms Touré's place to announce the election results.

The opposition wants to ensure that President Sall does not stand for a third presidential term.

The constitution sets a limit of two terms, but Mr Sall has refused to rule out running for a third term.