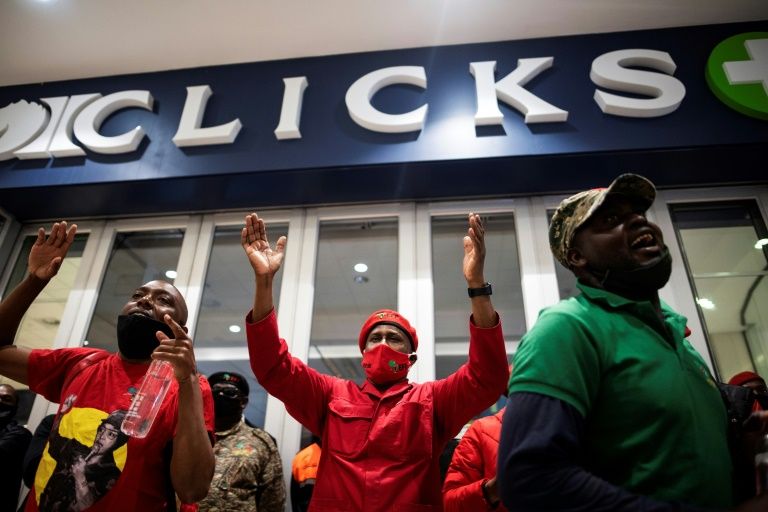 Protesters have forced several stores of a South African health and beauty company to close after it ran a hair advertisement they deemed racist.

The Clicks advert had pictures of African hair labelled dry, dull and damaged, while an example of white hair was described as fine and flat.
Opposition party Economic Freedom Fighters (EFF) called the advert "racist" and "dehumanising".

Its leader Julius Malema called for all Clicks stores to be closed.

The company has threatened legal action against the political party but Mr Malema urged his supporters to be "combat ready" and said the EFF wouldn't be "intimidated by threats".

"The implications of this are that black identity exists as inferior to the identity of white people. It is an assertion that white standards of beauty are to be aspired to and features of black represent damage, decay and abnormality," the EFF said in a statement.

The party members held similar protests in 2018 against clothing retailer H&M after the company published a catalogue in which a black boy wore a hoodie bearing the slogan "coolest monkey in the jungle".

The EFF, formed in 2013 by Mr Malema, has always taken a populist approach to distinguish itself from the ruling African National Congress (ANC) which it accuses of straying from its revolutionary ideals.

Mr Malema has charged that the ANC has neglected the poor - mostly black - community and instead represents the interests of big businesses, which are largely controlled by the white minority.

The Clicks advert, which has since been withdrawn, was posted online last week.

"[I am] deeply disappointed that we allowed insensitive and offensive images to be published on our website," Clicks boss Vikesh Ramsunder said in a statement on Sunday.

He added that the "negligent employees" had been suspended.

His apology has not assuaged EFF supporters who raided several stores across the country on Monday.

Videos shared on Twitter show some Clicks stores closed, while others have security guards forming a protective line in front of singing protesters.
In another video the party supporters are seen pulling down shelves in a store.

In Mpumalanga province, a group of people threw a petrol-bomb at a Clicks store in Emalahleni municipality.

"According to information that we have gathered, around 1am a group of men came and threw a petrol bomb at the shop. However, only a few glass [panes] were cracked but the shop itself is safe, nothing was damaged in the shop," said the province's police spokesperson Leonard Hlathi.