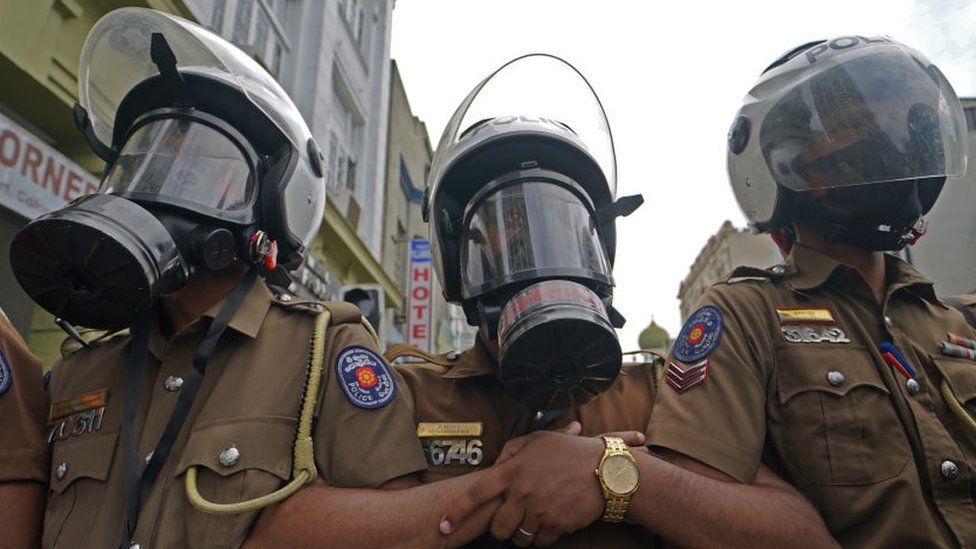 Sri Lanka's president says he has asked Russia's Vladimir Putin to help his cash-strapped nation import fuel, as it faces its worst economic crisis since independence from Britain in 1948.

Gotabaya Rajapaksa said he "had a very productive" discussion with Mr Putin.

It comes after Sri Lanka's energy minister warned at the weekend that the country may soon run out of petrol.

On Wednesday, hundreds of people took to the streets of the capital Colombo to protest against the government.

"I requested an offer of credit support to import fuel," Mr Rajapaksa tweeted in reference to his conversation with the Russian leader.

Mr Rajapaksa also said he had "humbly made a request" for flights between Moscow and Colombo to resume, after the Russian flag carrier Aeroflot suspended services last month.

"We unanimously agreed that strengthening bilateral relations in sectors such as tourism, trade and culture was paramount in reinforcing the friendship our two nations share," he added.

The country has already purchased oil from Russia in recent months to help bolster fuel supplies during the crisis, and the government has signalled that it is willing to buy more from the energy-rich country.

Attempts by Mr Rajapaksa to resolve Sri Lanka's worst economic crisis in more than 70 years, including securing financial support from India and China, have so far failed to end weeks of shortages of fuel, power, food and other essential items.

On Sunday, energy minister Kanchana Wijesekera said the country only had enough petrol left for less than a day under regular demand.

Last week, authorities suspended sales of petrol and diesel for non-essential vehicles in an attempt to preserve its dwindling fuel stocks.

On Thursday, the Central Bank of Sri Lanka raised its key interest rates by one percentage point to tackle the soaring cost of living in the country.

It comes as annual inflation hit a record high of 54.6% in June as the cost of food rose by more than 80%.

Hundreds of protesters had a day earlier on Wednesday gathered near the parliament building in Colombo as they launched what they called the "final push" to remove Mr Rajapaksa's government.

This week, the UK reinstated advice against all but essential travel to Sri Lanka because of civil unrest in the country.

Visiting countries against Foreign Office advice would be likely to invalidate one's travel insurance, the Association of British Insurers said.

Sri Lanka desperately needs the help of Russian President Vladimir Putin for both fuel and tourists, which are both vital to rescuing the country's economy.

The island nation has virtually run out of fuel, crippling businesses and public transport.

It is struggling to get oil shipments from its usual suppliers in the Gulf or elsewhere due to a lack of foreign currency as well as banking and logistical difficulties.

Western nations have imposed restrictions on Russian oil in response to its invasion of Ukraine. But President Gotabaya Rajapaksa is clearly willing to take the risk of triggering displeasure in Western capitals.

To add to Colombo's woes, Aeroflot suspended Moscow-Colombo passenger flight services last month after a Sri Lankan court briefly detained one of its planes following a commercial dispute over payment.

Russians accounted for almost a fifth of total tourist arrivals in the months before the war started in Ukraine.

Even if the flights resume, it may not be easy to attract Russian tourists as they could find it difficult to pay for things while they are on holiday.

Several Russian banks have been disconnected from using the SWIFT international payment system and Visa and Master credit cards have suspended Russian operations in response to Moscow's war on Ukraine.

Sri Lanka has seen its foreign exchange reserves shrink due to economic mismanagement and the impact of the pandemic.

As a result it has struggled to pay for imports of essential goods, including fuel, food and medicine.

In May, it defaulted on its debts for the first time in its history after a 30-day grace period to come up with $78m (£63m) of unpaid debt interest payments expired.

The country is currently in negotiations with the International Monetary Fund (IMF) over a £3bn bailout.

Sri Lanka's government has said it needs $5bn this year in support from the international community, including the IMF.

Sri Lanka: The basics
Sri Lanka is an island nation off southern India: It won independence from British rule in 1948. Three ethnic groups - Sinhalese, Tamil and Muslim - make up 99% of the country's 22 million population.
One family of brothers has dominated for years: Mahinda Rajapaksa became a hero among the majority Sinhalese in 2009 when his government defeated Tamil separatist rebels after years of bitter and bloody civil war. His brother Gotabaya, who was defence secretary at the time, is now president.
Now an economic crisis has led to fury on the streets: Soaring inflation has meant some foods, medication and fuel are in short supply, there are rolling blackouts and ordinary people have taken to the streets in anger with many blaming the Rajapaksa family and their government for the situation.