Sudan security forces 'carry out raid' ahead of mass protest 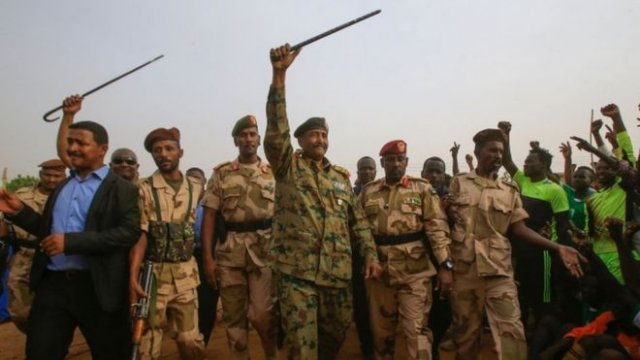 Gen Abdel Fattah al-Burhan (C), the head of the ruling military council, rallied support in the city of Omdurman on Saturday.
Shares

The "million-strong march" is in opposition to the military's refusal to hand control to civilians following Omar al-Bashir's removal from office.

It insisted the protests would go ahead on Sunday.

The SPA had organised a media briefing on Saturday evening to unveil plans for the rally, which will be the first mass demonstration since dozens were killed when the military opened fire on pro-democracy protesters on 3 June.
Media captionMeet Sudan's young protesters prepared to die to keep the country's revolution alive.

Everyone in the building was ordered to leave, Mr al-Rabie said.

He told Reuters the raid was "a violation of liberties that is even worse than the regime of the former president". After three decades in power, Mr Bashir was ousted as Sudan's president in April.

The military warned it would hold the opposition responsible for any violence or loss of life in the protests.

Gen Mohamed Hamdan Dagalo, also known as Hemeti, warned of "vandals" and a "concealed agenda" that might take advantage of the demonstrations.

Talks between Sudan's Transitional Military Council (TMC) and the opposition movement collapsed after 3 June and have not resumed despite mediation by the African Union (AU) and Ethiopian Prime Minister Abiy Ahmed.

On Friday, the SPA said two leading members of the opposition had been detained and urged "the international community to demand their immediate release".