Theresa May : Who will be the next prime minister? 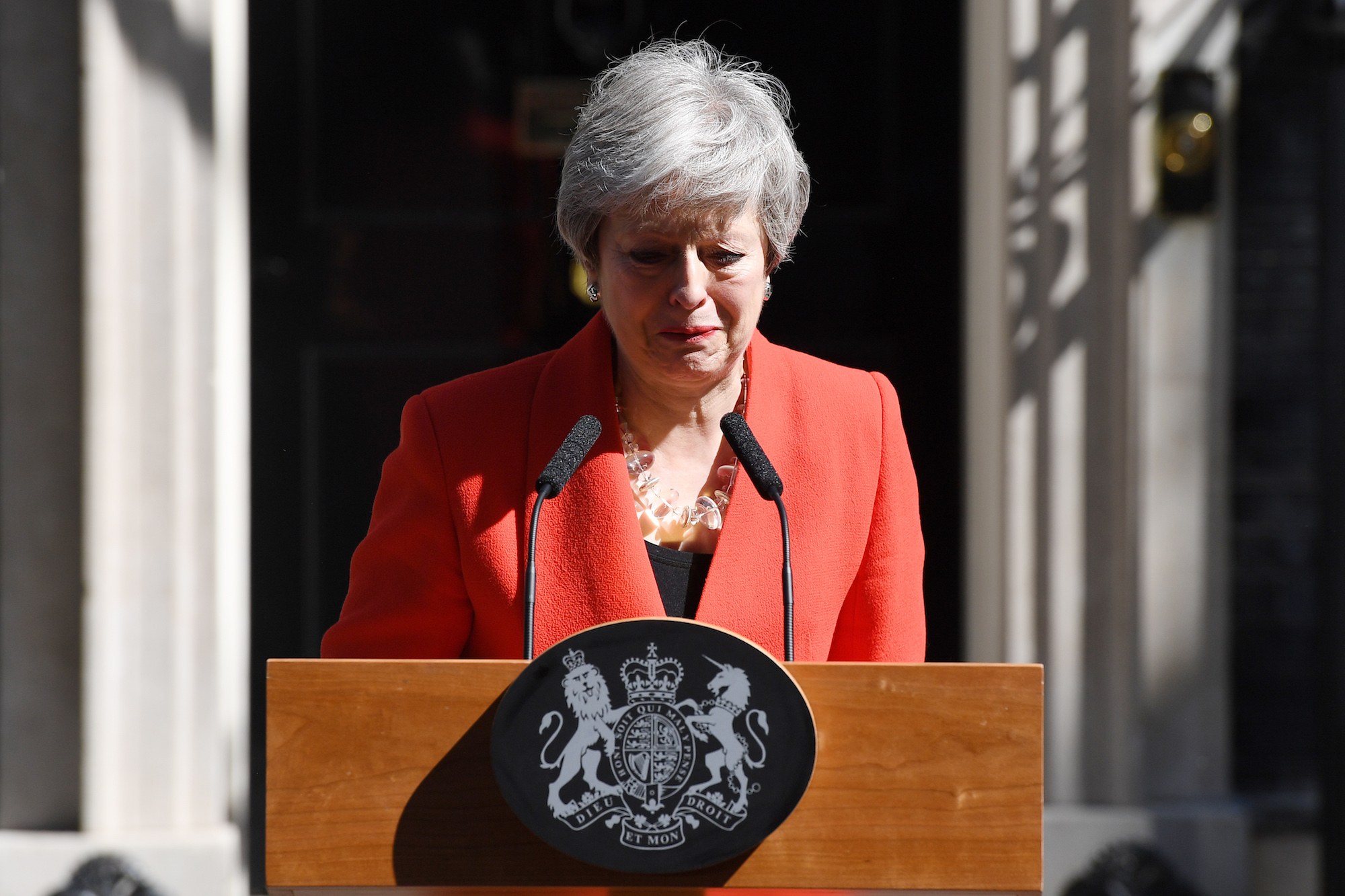 Conservative MPs are throwing their hats into the ring to become the next Tory leader and prime minister, after Theresa May announced she would be stepping down on 7 June.

Here is a list of confirmed contenders and some who are believed to be seriously considering entering the contest.

The ambitious MP for West Suffolk was promoted to health secretary after only a few months as culture secretary - when Jeremy Hunt became foreign secretary after Boris Johnson's resignation.

He campaigned for Remain in the EU referendum but is now seen as an ally by Brexiteer ministers.

He recently urged MPs to back the Withdrawal Agreement Bill.

The former Bank of England economist likes to see himself as one of the most technology-savvy politicians at Westminster and was the first MP to have his own smartphone app.

After six years at the Department of Health, Jeremy Hunt was moved to the Foreign Office following Boris Johnson's resignation.

He campaigned to remain in the EU during the 2016 referendum, but has since been reborn as a Brexiteer, even comparing the EU to the Soviet Union to widespread criticism.

An MP since 2005, he was made culture secretary under the coalition government in 2010 and moved to health after overseeing the 2012 London Olympics.

Mr Hunt confirmed he would be standing during a speech at the Haslemere Festival on Friday.

In his own words: "Theresa May's passion was to deliver the referendum result. That will now be somebody else's responsibility." (Interview with Farnham Herald, 24 May)

The former mayor of London has long coveted the top job. He announced he would be standing, saying: "Of course I'm going to go for it."

Mr Johnson, the face of the Vote Leave campaign, quit as foreign secretary last year in protest at Theresa May's Brexit plans and has been a loud and prominent critic of her and her policies ever since.

He is a popular figure with Conservative members, but has fewer fans in Parliament. His main task will be to convince enough Tory MPs to vote for him to get on to the ballot of party members.

He stepped back from the 2016 leadership fight after fellow Brexiteer Michael Gove launched his own campaign for a run at the top job.

His backers include colleagues Johnny Mercer and Nadine Dorries, along with former MP Karl McCartney.

In his own words: "A new leader will have the opportunity to do things differently and have the momentum of a new administration." (Speaking at conference in Switzerland, 24 May)

Andrea Leadsom, former leader of the House of Commons

A prominent Brexiteer, the former Commons leader decisively quit the cabinet as Mrs May tried to win last-gasp support for her withdrawal bill. She said she no longer believed the government's approach would deliver Brexit.

She had to abandon a leadership bid in 2016 after widely criticised comments about rival Theresa May.

Ms Leadsom has served as MP for South Northamptonshire since 2010 and was environment secretary before taking up the post of Leader of the House of Commons.

She announced her bid for the leadership in an interview with the Sunday Times.

In her own words: "To succeed in a negotiation you have to be prepared to walk away." (Interview with the Sunday Times, 26 May)

Asked on Talk Radio whether she would run for leader, the MP for Tatton, in Cheshire, said: "I've always said quite clearly that if I got enough support from colleagues then yes, I would, and now people have come forward and I have that support."

She is backed by MPs Pauline Latham and Ben Bradley.

In her own words: "Whoever the new leader is, and I have put my hand in, the 31st October Brexit date is set in stone." (Hosting Talk Radio phone-in, 24 May).

A former lawyer and staunch Brexiteer who was calling for Britain to leave the EU long before the referendum, Mr Raab has been tipped for high office since being elected as an MP in 2010.

He was appointed as a justice minister in 2015 but was sacked by Theresa May when she became prime minister the following year.

After David Davis's resignation as Brexit secretary in July 2018, Mr Raab was appointed his successor, only to resign himself in opposition to Mrs May's EU deal, which he said he could not "in good conscience" support.

MP Helen Grant has quit as vice chairwoman of the party to support his leadership bid.

In his own words: "I will fight for a fairer deal on Brexit, a fairer deal for British workers, and a fairer society where every child can fulfil their potential." (Mail on Sunday, 26 May)

The former prisons minister was appointed international development secretary in early May, in a reshuffle that followed Gavin Williamson's sacking.

Although once a Remain supporter, he said he accepted Brexit but wanted "to reach out to Remain voters as well to bring this country together again".

"The only way I can do that is by moving beyond my brief and beginning to lay out, whether it's on climate change or any of these other issues, what I think it would mean to be a country we can be proud of," he told the BBC's Political Thinking With Nick Robinson podcast.

The former journalist, who has been MP for Surrey Heath since 2005, was a key ally of then Prime Minister David Cameron before throwing his weight behind the Vote Leave campaign in the 2016 EU referendum.

He made his name as a radical education secretary, his term characterised by battles with the teaching unions.

He famously scuppered the leadership hopes of his friend and fellow Brexiteer Boris Johnson in the aftermath of the referendum, announcing his own candidature on the morning Mr Johnson was due to launch his campaign - and saying he did not think Mr Johnson was up to it. He was soundly defeated.

He has stayed in the cabinet as environment secretary to fight for Mrs May's EU deal, rather than following other Brexiteers out of the door.

He is expected to pitch himself as the "unity candidate" in the contest.

The long-standing chairman of the Conservative backbench 1922 Committee resigned his position shortly after Mrs May's announcement and said he was considering running.

"I have been urged by a number of colleagues from across the party from inside Parliament, and outside, asking me to put myself forward as a candidate," he told the BBC. "Therefore, I have made the decision to stand down as chair of the 1922 Committee in order to ensure a fair and transparent election process."

The home secretary backed Remain in the Brexit referendum but with a "heavy heart and no enthusiasm", and he has never hidden his Eurosceptism.

Born in Rochdale, his father was a bus driver who reputedly arrived in the UK from Pakistan with £1 in his pocket. Mr Javid worked as a credit trader at Deutsche Bank before entering politics.

A former protege of George Osborne at the Treasury, he has been an MP since 2010 and has previously served as business secretary, culture secretary and communities and local government secretary.

MP Robert Halfon has announced he would back Mr Javid.

With a background as a naval reservist, and having served as an armed forces minister under David Cameron, Ms Mordaunt seemed well prepared for the role.

The former international development secretary was a high-profile campaigner for the Leave campaign during the 2016 EU referendum, and underlined her pro-Brexit credentials by backing Andrea Leadsom in the subsequent Conservative leadership contest. This time around, she is touted as a contender in her own right.

Elected as MP for Witham in May 2010, she served as a minister in the Treasury and Department of Work and Pensions before being appointed international development secretary.

She resigned from the cabinet in 2017 after a row over a series of unofficial meetings with senior Israeli figures.

She is admired on the right of the party for her strong pro-Brexit stance.

A Brexit-friendly right-winger, the chief secretary to the Treasury has been making thinly veiled leadership speeches for some time.

The MP for South West Norfolk was the first woman justice secretary.

She caused a stir on social media in her earlier role of environment secretary when she told the Tory party conference in a dramatic voice that "we import two-thirds of our cheese. That. Is. A. Disgrace".

The deadline for nominations is the week starting 10 June.

Candidates each need two proposers. If there are more than three candidates, Tory MPs carry out a series of votes until two remain.

Conservative Party Chairman Brandon Lewis said he hoped the process to determine the final choice to put to members would be concluded by the end of June.

There will then be a series of hustings around the UK followed by a postal ballot of Conservative Party members, with the result announced before Parliament rises for the summer.