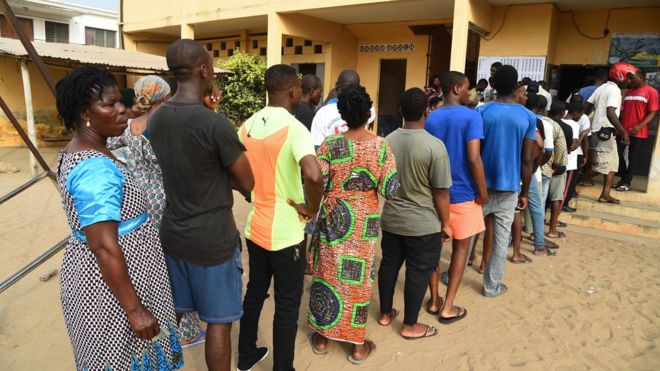 Togolese people voted on Saturday for their new president
Shares

A Togo opposition leader has accused authorities of setting up fake polling stations in Saturday's presidential election to skew the result in favour of the incumbent.

AgbÃ©yomÃ© Kodjo made the accusation against President Faure GnassingbÃ© who has been in power since 2005 when he took over from his father.

The president's office is quoted by AFP news agency as denying the accusation.

Early on Monday, the electoral commission said that Mr GnassingbÃ© had received 72% of the vote, compared with about 18% for Mr Kodjo.

Mr Kodjo, former prime minister and head of the national assembly, also accused the authorities of ballot stuffing and getting people to cast multiple votes in Mr GnassingbÃ©'s favour.

Togo's Security Minister, Yark Dameham, told Voice of America that Mr Kodjo's house had been surrounded as a precaution.

"We have received reports that he is at risk of an attack on his house by unruly individuals, but I cannot tell you from which side," he is quoted as saying.

But Mr Kodjo told the BBC that he was given no explanation and believed this was not for his protection but instead to allow time to rig the vote.

Mr GnassingbÃ© has led Togo's population of eight million people since taking over following the death of his father GnassingbÃ© Eyadema, who ruled for 38 years.

He faced six rivals for the position of president.

Constitutional changes were approved last year allowing him to seek re-election and potentially stay in office until 2030 - an issue which sparked huge protests in 2017-18.