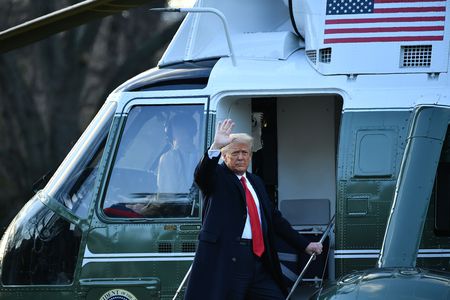 Donald Trump has left Washington DC and the White House for the final time as president, as Joe Biden prepares to be sworn in at midday on Wednesday.

The outgoing president left the White House at 8.18am aboard a helicopter, headed for Joint Base Andrews, where Trump was due to give a speech. Trump had demanded an ostentatious ceremony with a sprawling crowd, but didn’t quite get the latter. TV footage showed several empty spaces among the people who had gathered in a viewing area.

Attendees had been told to arrive at the Joint Base Andrews, a military air base used by presidents, between 6am and 7.15am, when the temperature hovered above zero. A campaign-style stage was set up at the base, with total of 17 US flags hung behind a speaker’s podium. Air force one presidential plane was parked in the background, waiting to fly the president out.

Trump was due to speak at 8am, but there was a delay. Trump and Melania Trump boarded Marine Force One at the White House at 8.15am, the president offering a wave as he walked to the helicopter. At 8.18am, the helicopter took off, headed for a destination 15 miles south-east of the White House.

The helicopter landed just before 8.30am, as the song Gloria by Laura Branigan blasted out at the stage. Trump exited to the sound of Don’t Stop Believing, by Journey. Both songs have been staples at Trump’s rallies.

The president had been hoping for a large crowd to see him off. It didn’t happen.

Senior Republicans had shunned the event, including House GOP leader Kevin McCarthy and Senate majority leader Mitch McConnell, in favor of attending Biden’s inauguration. Even Trump’s vice-president Mike Pence didn’t make it – a White House official told reporters it would be difficult for Pence to attend both the send off and the inauguration.

Trump, who has not left the White House for over a week, had reportedly spent recent days in a dejected mood, but according to CNN, the outgoing president had been “eagerly anticipating” the send off event.

Trump is set to board Air Force One after the ceremony and head for the Mar-a-Lago resort in Florida. His aides are carrying the so-called “nuclear football”, which will continue to be at Trump’s behest until midday.

In recent administrations the football – which serves as the key to America’s nuclear arsenal – has passed from the outgoing president to his successor after the inauguration. With Trump set to be in Florida while Biden’s inauguration takes place, the incoming president will instead take possession of a second football. At 12pm, when Biden is sworn in, Trump’s nuclear codes will go dead.