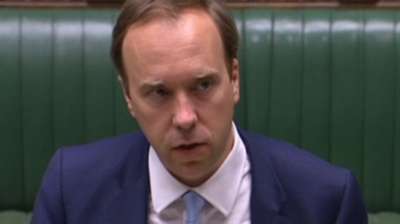 Health Secretary Matt Hancock has told the House of Commons that efforts to find a coronavirus vaccine are "moving at pace".

He told MPs that yesterday the pharmaceutical firm AstraZeneca had signed a deal for the manufacture of Oxford University's AZD1222 vaccine, which he described as "the world's most advanced in development".

Meanwhile, Imperial College last week began the first phase of its human trials for a possible Covid-19 vaccine, which will involve 300 patients being given dosages.

"Should they develop promising results, Imperial will move to a large phase three trial later this year," Hancock said.

He said researchers were looking for more numbers of healthy participants to take part in the clinical trials - due to begin tomorrow. They hope that a viable vaccine could be ready by next spring.

Shattock said they were starting with a very small number of volunteers "so we don't want people to be disappointed if they are not immediately engaged in the clinical trial".