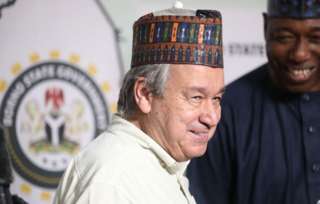 The UN Secretary-General, António Guterres, has appealed to international donors not to divert resources from other humanitarian activities around the world to Ukraine.

Instead they should donate more for the Ukrainian crisis without undermining efforts elsewhere around the world.

Mr Guterres made the remarks during a visit to Nigeria, where he's been to areas affected by the jihadist conflict.

He said the war in Ukraine was making things worse across the world particularly in areas of food and energy.

Some humanitarian agencies are already complaining of a huge funding shortfall as countries focus more on what's happening in Ukraine.

Nigeria's President Muhammadu Buhari said the visit by the UN chief was an assurance that Africa had not been forgotten despite the global attention on what he called the ''unfortunate situation in Ukraine".