US approves $2.6bn in new aid for Ukraine 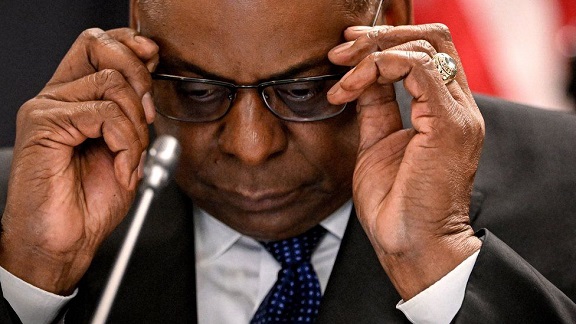 The US has approved nearly $2.7bn (£2.3bn) in new aid for Ukraine including $675m in arms supplies as the country battles Russia's invasion.

Defence Secretary Lloyd Austin announced the package at a meeting with dozens of fellow ministers at the US air base in Ramstein, Germany.

The US has already pledged at least $13bn in military aid for Ukraine.

Mr Austin said Ukraine's allies must commit to supporting the country for as long as necessary and be prepared to adapt the type of support offered.

"It means moving urgently to innovate and to push all of our defence industrial basis to provide Ukraine with the tools that it will need," he said.

Describing Russia's invasion as an "illegal, imperial and indefensible war of conquest", he said: "Now we're seeing the demonstrable success of our common efforts on the battlefield."

On Wednesday, Ukrainian President Volodymyr Zelensky said his country's military had recently carried out successful attacks against Russian forces which control large areas of Ukraine in the south and the east - and retaken settlements near the north-eastern city of Kharkiv.

He did not give details but both Ukrainian and pro-Russian officials report fighting around Balakleya, 60km (38 miles) south-east of Kharkiv.

Russian President Vladimir Putin denied reverses on Wednesday, saying: "We have not lost anything and will not lose anything."

Russia says it is fighting neo-Nazis in Ukraine - a claim widely dismissed - and that it is threatened by the Nato alliance's strong relations with Ukraine.

Since the invasion on 24 February, the UN has recorded at least 5,718 civilian deaths, with 8,199 injured, and more than seven million Ukrainians have been recorded as refugees across Europe. An unknown number of combatants have been killed or injured.

Russia, a global energy supplier, is locked in an economic struggle with the West which imposed sweeping sanctions in response to the invasion.