US election 2020: Trump back on campaign trail in Florida 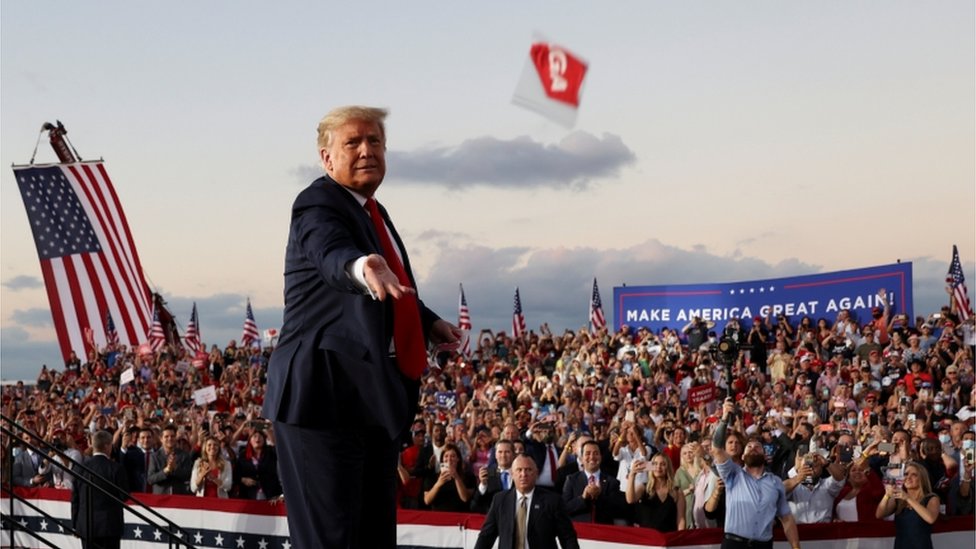 President Donald Trump has returned to the campaign trail less than two weeks after testing positive for coronavirus.

Thousands gathered at an outdoor rally in Sanford, Florida, where a defiant Mr Trump made the first of four planned campaign stops over the next four days in battleground states.

The president and rival Joe Biden are scrambling to secure votes with three weeks until the 3 November election.

On Monday Mr Biden spoke in Ohio, another swing state.

Polling suggests Mr Biden has a 10-point lead over Mr Trump nationally. However his lead in some key states is narrower - as is the case in Florida, where he is 3.7 points ahead, according to an average of polls collated by Real Clear Politics.

Battlegrounds like the "Sunshine State" are crucial for gathering the 270 electoral college votes needed to win the White House, which is not determined by a simple popular ballot count.

Mr Trump tested positive for Covid-19 some 11 days ago, and was admitted to Walter Reed Medical Center a day later.

But on Sunday his personal doctor said he was no longer a Covid transmission risk to others and disclosed on Monday that his most recent tests were negative over consecutive days, although he did not give the dates.

The usual chants of "Four more years!" are being heard as hundreds queue to enter the open air space where the president is appearing this evening.

People are getting their temperature checked and are being offered face masks. Those who have covered up don't think it's too soon for the president be out and about. They say they admire him for it. One man here tells me he is originally from New York and has made Florida his home - just like "his hero" Donald Trump.

The Trump campaign team are throwing everything at Florida - a loss here makes his return to the White House near impossible.

Over the weekend, his eldest son Donald Trump Jr concluded his Florida bus tour, "Fighters Against Socialism" - a pitch primarily aimed at Hispanic voters. A little over 100 people from Venezuelan, Puerto Rican and Vietnamese backgrounds sitting shoulder to shoulder, some masked, watched Mr Trump Jr's speech in Orlando. He was joined by Cuban-American fighter Jorge Masvidal, who is a big star here.

But though the president and some of his supporters here seem relaxed about coronavirus, it has hit Florida hard, with more than 15,000 deaths. Democratic rival Joe Biden arrives here on Tuesday. His team are focusing on the administration's handling of the pandemic and plan to carry out a quieter but vigorous campaign in key suburban areas which they hope will help flip the state blue.

What did the president say in Florida?
In his first stump appearance following his Covid-19 diagnosis and recovery, a re-invigorated Mr Trump returned to his campaign's familiar themes and lines of attack against Mr Biden. He touted stock market growth, the establishment of the US Space Force and his successful confirmation of two conservative Supreme Court justices to the bench - with a third nominee, Judge Amy Coney Barrett, before the Senate this week - as major achievements.

Before a crowd of several thousand - many of whom were not wearing masks - he denounced plans to prolong shutdowns supported by Democrats and sought to question Mr Biden's mental acuity.

Referring to his own recovery from Covid-19, he said at one point: "They say I'm immune - I feel so powerful. I'll walk in there and kiss everyone. I'll kiss the guys and the beautiful women, I'll give you a big, fat kiss."

It was no surprise that the Sunshine State is the place where Mr Trump made his big rally return.

He wants and needs to win Florida, a state he narrowly carried in 2016. It is also his adopted home. A lifelong New Yorker, he made himself a Florida resident last year in September.

Though he is behind in the polls nationally, close races in crucial states mean he may yet win re-election by capturing key electoral college-rich territories.

The president's rally showed little sign that Mr Trump has been chastened by his past weeks' illness, and events later in the week in Pennsylvania, Iowa and North Carolina are unlikely to exhibit changes in his approach to coronavirus precautions.

Critics have disparaged him for not encouraging people to wear protective masks or abide by social distancing guidelines.

He has taken a more cautious approach to campaigning, making two stops in Ohio on Monday. The Democrat is due to appear in Florida on Tuesday.