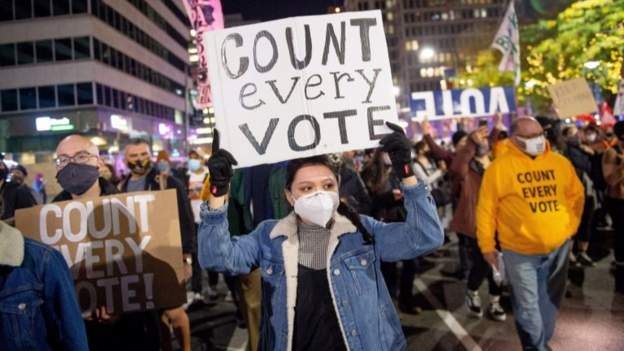 Pennsylvania's governor, Tom Wolf, says the vote count there will continue, despite efforts by President Trump's campaign team to stop it.

It has claimed that Democrats are trying to hijack the vote in Pennsylvania. Deputy campaign manager Justin Clark said Democrats were “scheming to disenfranchise and dilute Republican votes”. However there have been no reports of fraud or irregularities.

"These attempts to subvert the democratic process are simply disgraceful," said Mr Wolf, a Democrat. "I'm going to fight like hell to protect the vote of every Pennsylvanian. I'm going to do everything in my power to make sure that every vote counts."

Outstanding ballots seem likely to favour Biden, the BBC's US partner CBS reports. They are postal votes and of the 3.1 million postal ballot requests made in Pennsylvania, 63% were from Democrats.

With 20 electoral college votes, Pennsylvania is a key election prize. The state voted Democrat in six consecutive races before it swung to Trump in 2016.