US Election: Trump refusal to concede 'an embarrassment'- Biden 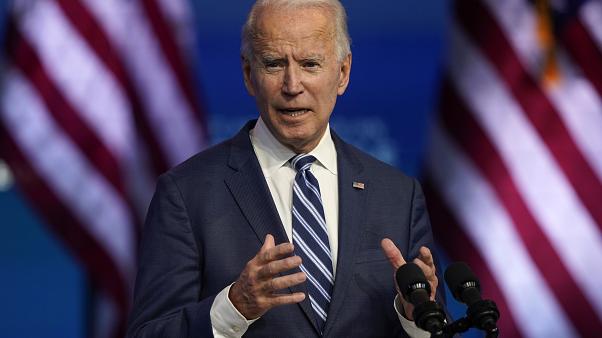 But the US president-elect - who has been making contact with foreign leaders - insisted nothing would stop the transfer of power.

Mr Trump meanwhile tweeted he would ultimately win the race that all major TV networks have forecast he lost.

As happens every four years, US media projected the election victor.

None of the state-by-state results have yet been certified, several vote counts are continuing, and the outcome will only be set in stone once the US Electoral College meets on 14 December.

What did Biden say?
The president-elect was asked by a reporter on Tuesday what he thought of President Trump's refusal to acknowledge defeat.

"I just think it's an embarrassment, quite frankly," Mr Biden, a Democrat, said in Wilmington, Delaware.

"The only thing that, how can I say this tactfully, I think it will not help the president's legacy."

"At the end of the day, you know, it's all going to come to fruition on January 20," he added, referring to inauguration day.

Mr Biden has been fielding phone calls with foreign leaders as he prepares to assume office.

Referring to those calls, Mr Biden said: "I'm letting them know that America is back. We're going to be back in the game."

But as he and Vice President-elect Kamala Harris forge ahead, a little-known government agency led by a Trump appointee is stalling the handover.

The General Services Administration co-ordinates funding and access to federal departments for incoming administrations. However, it has so far declined to formally recognise Mr Biden as president-elect.

Nevertheless, the Democrat said: "We don't see anything slowing us down, quite frankly."

What did Trump and his allies say?
On Tuesday, Mr Trump took to Twitter to fire off several tweets in capital letters about "massive ballot counting abuse", asserting: "We will win!"

His tweets were labelled by the social media network as disputed.

The president has been making unsubstantiated claims that Mr Biden was only able to win the election through electoral corruption, but no proof has emerged so far to support the allegation.

US Secretary of State Mike Pompeo, a Trump loyalist, told a news conference at the Department of State on Tuesday that once every "legal" vote was counted a "second Trump administration" would begin.

Asked on Tuesday why he had not congratulated the Democrat, Senator Ron Johnson of Wisconsin said: "Nothing to congratulate him about."

Missouri Senator Roy Blunt said Mr Trump "may not have been defeated at all".

Senate Republican leader Mitch McConnell has said Mr Trump has every right to launch legal challenges to the result in several battleground states such as Pennsylvania.

Why most Republicans are tight-lipped
Analysis box by Anthony Zurcher, North America reporter
Few Republicans want to attract the ire of the president by publicly accepting that Joe Biden has won. The ones who have spoken out already - Senators Susan Collins, Ben Sasse and Mitt Romney among them - broke with Trump a long time ago.

For the rest, the president still has enormous power in the party's base, and he can - and has - wielded it against those he believes are insufficiently loyal.

And so, from Republican Senate Majority Leader Mitch McConnell on down, the name of the game is patience. Accept that the president has a right to make his claims, give him time to vent his frustration, but figure that there will be no evidence of sufficient enough magnitude to change the results of the election.

Celebrate Republican down-ballot wins, without acknowledging the absurdity of alleged election-fixing that is massive enough to unseat a president but not to deliver a fully Democratic Congress.

Through their actions, if not their words, the president's fellow Republicans are acknowledging that come January, there will be a new president. Mr Trump, too, shall pass.

line
What's the latest with the fraud allegations?
A Pennsylvania postal worker who claimed that officials tampered with mail-in ballots in the swing state has recanted his claims, according to the Democratic-controlled House of Representatives Oversight Committee.

Richard Hopkins alleged that a postmaster in Erie, Pennsylvania, had instructed workers to backdate late votes so they could be counted.

He signed a legal statement under oath attesting to his claim, but the oversight committee said Mr Hopkins had disowned the allegation after questioning by a US Postal Service inspector general.

A man claiming to be Mr Hopkins later denied retracting his story in a video posted to YouTube. "I did not recant my statement," he said. "That is not what happened and you will find out tomorrow."

Mr Trump retweeted the video, lauding the purported whistleblower as a "brave patriot".

Mr Hopkins' claim was cited in a letter from Senator Lindsey Graham, a Trump ally, to the Department of Justice, urging it to open a federal investigation

What's happening with Senate races?
Republicans received a boost on Tuesday in their campaign to keep control of the upper chamber of Congress as a Democratic challenger conceded defeat in a North Carolina race.

The state's Republican incumbent Thom Tillis narrowly held on after his Democratic opponent, Cal Cunningham, was engulfed by scandal over an extramarital affair.

With North Carolina settled, all eyes now turn to Georgia, where the two Senate seats currently held by Republicans will be decided in a runoff election in January.

If the Democrats win both seats - which won't be easy - they could still flip control of the Senate. That's because, in the event of a 50-50 tie, the vice-president is the tie-breaker, and Kamala Harris is due to take office in January.

Last week, Republicans were also able to retake an Alabama Senate seat won by Democrats in 2018, though they lost seats in Colorado and Arizona. The Republican candidate is currently leading in Alaska's race, where votes are still being tabulated.